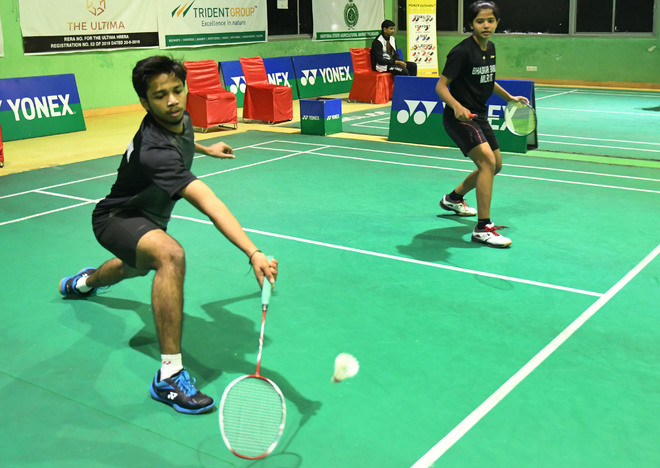 A badminton match in progress at the sports complex in Sector 38 (West), Chandigarh. - File photo

After a wait of almost two months, intermediate players and leisure activity sports lovers will be able to use the facilities at the local sports complexes as UT Administrator and Punjab Governor VP Singh Badnore gave the go-ahead for it at a war room meeting today.

Intermediate players of various age groups have been demanding reopening of sports complexes that were shut for all during the partial lockdown. However, since relaxations have been given at various fronts, these players have been demanding the permission to practise. The matter was reported in these columns recently and Secretary Sports KK Yadav had assured of taking up the issue in the meeting.

“Members are allowed to use the sports complexes, but they must adhere to Covid-appropriate behaviour,” said a spokesperson.

The UT Sports Department will issue guidelines, including SOPs to be followed, distribution of time slots for the usage of players and members, criteria for playing, and other details within a few days after which the players will be allowed to use the facilities.

“After receiving an official notification from the UT Administration, the Sports Department will further assess the situation and issue proper guidelines before permitting intermediate players to use the facilities. The process will take a couple of days and coaches will supervise the arenas. If anyone found guilty of not following guidelines, his/her membership will be revoked,” said a senior official.

Earlier, UT Administrator and Punjab Governor VP Singh had allowed opening of sports complexes from June 1, but only for professional players. Besides swimming, badminton, lawn tennis, squash and gyms attract most of the memberships. These facilities are also one of the most revenue-earning areas of the UT Sports Department.

No decision on opening pools

The Administrator, meanwhile, did not take any decision on opening of swimming pools for the general public (members). Limited pools of Chandigarh (under the UT Sports Department) are allowed to open for professionals. “Opening of swimming pools for the general public is not feasible right now considering the threat of this virus. It’s not advisable to allow larger gatherings at one place using common things. We can think of opening pools in the coming weeks, but it will surely take time,” said an official.