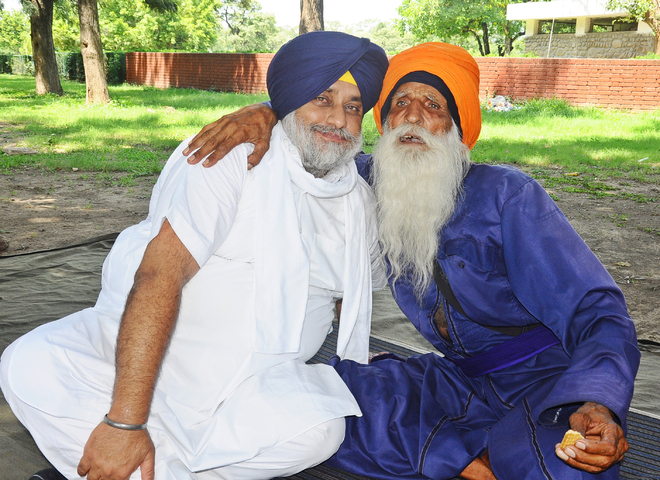 While farm activists were protesting against BJP’s former city chief Sanjay Tandon’s visit to Khuda Ali Sher, Shiromani Akali Dal (SAD) president Sukhbir Badal arrived at Matka Chowk today and met with Laabh Singh who has been protesting the three farm laws for the past over five months.

The post shared on Badal’s Facebook read: “Visiting Baba Laabh Singh ji at Matka Chowk in Chandigarh today was like paying homage to the very spirit of the #KisanAndolan. Babaji has braved everything to remain at the chowk for five months now. We must all learn from him. He is a true inspiration of selfless service.”

The farm activists have condemned Badal’s visit to the chowk. “We weren’t there with Laabh Singh when Badal came to visit him; we were protesting at Khuda Ali Sher. Badal’s party was hand in glove with the BJP when the farm bills were passed by the Centre. Our protest is not associated with any political party or group. We are directly under the Samyukt Kisan Morcha. We condemn Badal’s visit,” said Gurjit Singh of Kisan Ekta, Chandigarh.

Meanwhile, Sukhbir said he had come to know about the protester when he saw a video in this regard during the ongoing parliament session. “I felt honour-bound to come here and seek his blessings as well as express solidarity with him”. During his interaction with the aged protester, Badal referred to the former as a strong pillar of the Khalsa Panth. The protester told the SAD leader that he was being targeted by the UT Administration but he was steadfast in his resolve to continue his sit-in to inspire the future generations.