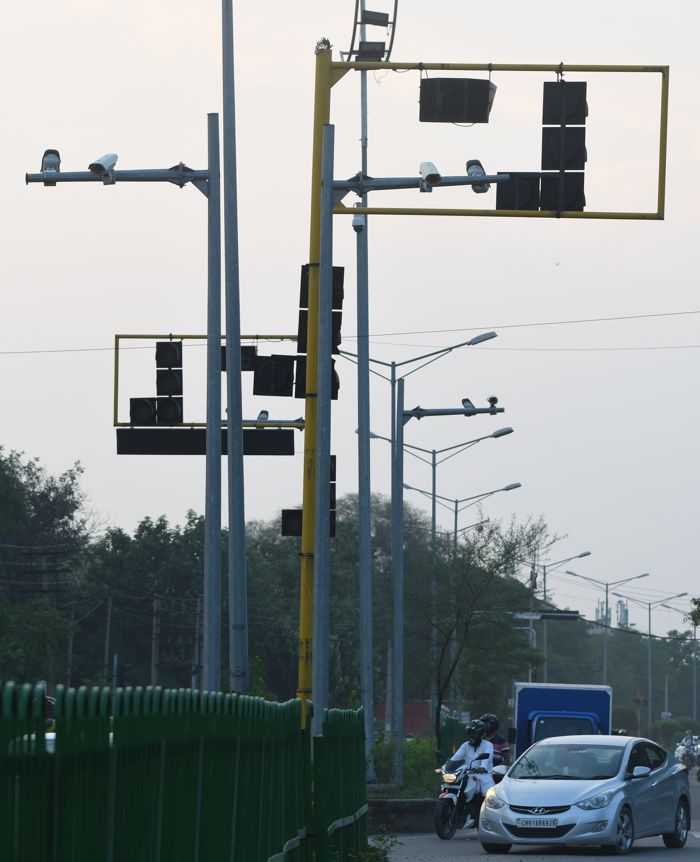 The existing CCTV cameras were installed in three phases in 2015-2016, and Chandigarh had followed suit. RAVI KUMAR

The Panchkula police are carrying out a survey for installation of smart cameras on the lines of Chandigarh to curb traffic violations at roundabouts and traffic light points in the city. The move will help tackle violations such as speeding and jumping of red light, besides detecting high-security registration plates.

Once new cameras are installed, challans will be sent directly to the home of violators. In the first phase, the police are working on the sites and number of cameras to be installed. In 2015-2016, CCTV cameras were installed in three phases in Panchkula city and other parts of the district and a control room had been set up at the Sector 14 police station.

For the time being, the police are using these cameras to identify traffic violators and trace criminals. While Panchkula took the lead in installing cameras, it had fallen behind the UT in terms of installing smart cameras.

Smart cameras at these points would also help reduce accidents, besides nabbing criminals. According to information, 394 cameras are installed in the city, of which 15 per cent are non-functional. Besides, 59 cameras have been installed in Kalka, Pinjore, Barwala and Raipur Rani.

The office of the Deputy Commissioner of Police had written to the municipal corporation and the Haryana Shehri Vikas Pradhikaran to provide information about development works being carried out in the city so that in case wires were snapped, these could be repaired by contractors of the departments concerned without delay. Police Commissioner Hanif Qureshi said the plan was being made to install smart CCTV cameras in the district to curb speeding, traffic lights violations and detection of high-security registration plates.

Survey is on to identify sites where smart cameras are to be installed in the first phase. — Hanif Qureshi, Police Commissioner