Will ask drivers to join probe for clues: Police 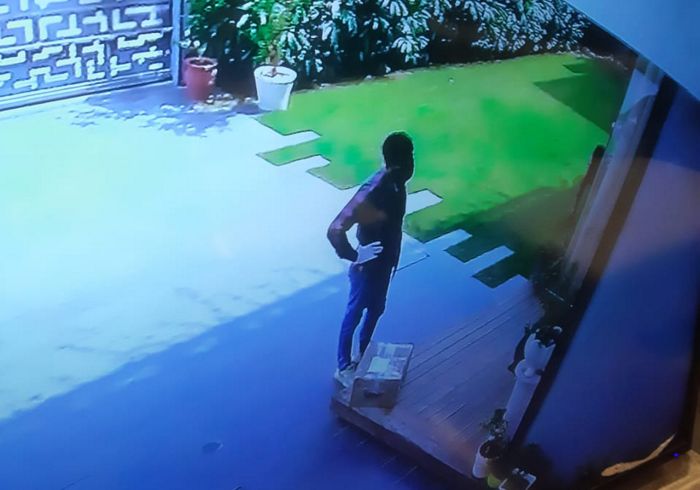 The masked suspect at the door of Sector 35 residence.

The armed youth who attempted robbery at a businessman’s house in Sector 35 on Tuesday had changed multiple auto-rickshaws after fleeing the scene to avoid getting caught. Police investigation has revealed the suspect fled towards Panchkula after the incident.

The suspect, armed with a pistol, had entered the house posing as a delivery boy. He was carrying a box, which he left behind while fleeing. The box was later found to have been containing bricks and some old clothes.

A police official privy to the investigation said the CCTV cameras installed at various points installed under the Smart City project were analysed to track the suspect as he fled after the unsuccessful robbery attempt.

“He fled in an auto-rickshaw and alighted around 1 km away. He changed several auto-rickshaws while fleeing towards Panchkula,” the police official added.

The police said the auto-rickshaw drivers concerned would be asked to join investigation to gather clues about the suspect.

Meanwhile, the police have shared the CCTV footage with neighbouring states to identify the suspect.

The suspect had arrived at the house posing as a delivery boy. The remote-controlled main gate was opened by a woman, who was unaware of the suspect’s intention, present in the house.

The suspect, who was wearing glasses, mask and gloves, gained entry into the house, but a kid present there ran outside after seeing a pistol in his hand, which alerted the woman, who raised the alarm. Scared, the suspect fled the scene by scaling the main gate, which had closed by then. In the hurry, the suspect left the box behind, which was later opened by the police.