Had set up a fake call centre in Zirakpur, used to target gullible people 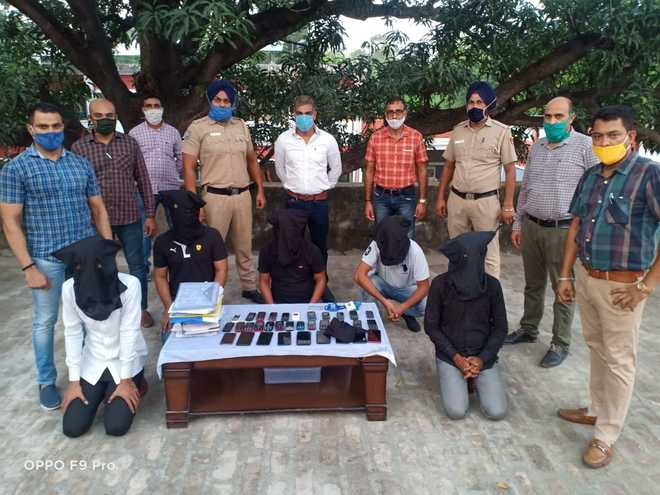 The suspects in police custody in Chandigarh on Tuesday.

A gang of swindlers, which used to dupe people on the pretext of insurance policies, has been busted by the cyber crime investigation cell of the UT police. Six suspects have been arrested. They were operating a fake call centre in Zirakpur, from where calls were made to gullible people.

The police said a case of cheating was registered at the Sector 34 police station on a complaint of Nirmal Singh, a resident of Sector 44, who reported that an unknown person called him in June this year and discussed his old insurance policy.

The fraudster claimed that the complainant’s insurance policy, worth Rs25 lakh, had matured and if he wanted to claim it, he would have to deposit fee and some documents.

The complainant got lured and he deposited Rs16.5 lakh in different bank accounts.

He later realised that he had been cheated.

The police said they had also received a similar complaint of fraud from a Sector 42 resident, AD Rajput, who lost Rs2 lakh on the pretext of paying an instalment of his insurance policy in advance. He was also duped by the same gang.

Inspector Devinder Singh, in-charge of the cyber cell, said some of the suspects had earlier worked as insurance agents and had information about many people having insurance policies.

An amount of Rs4 lakh, 30 mobile phones along with SIM cards of different service providers and 10 diaries containing information regarding victims, have been recovered from the suspects.

They had set up a call centre in Zirakpur and used to target senior citizens, who had purchased insurance policies from different companies, by alluring them to deposit money on the pretext of huge maturity amount of their policies.

The suspects were produced before a court today, which remanded them in three-day police custody. — TNS