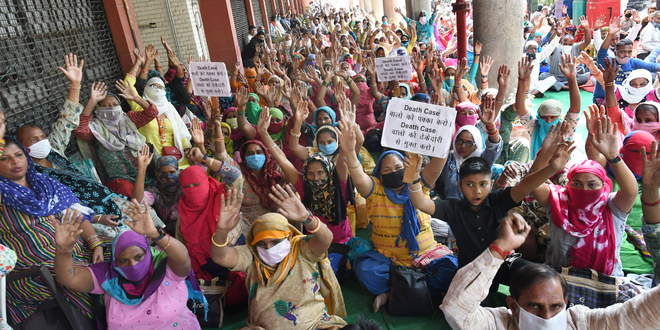 Door-to-door garbage collectors today went on indefinite strike against the MC move to take over collection and segregation of waste in the city. Sanitation staff too continued their strike against GPS-enabled wrist watches, which track their location and have to be used to mark attendance online.

The strike by door-to-door garbage collectors and sanitation workers will continue at least till Monday as no consensus could be reached during a meeting between MC Commissioner KK Yadav and a delegation of workers.

While Yadav claimed that the meeting was fruitful, Safai Karamchari Union president Krishan Kumar Chadha said their demands were not agreed to. Chadha said, “We will continue the strike and will decide our next course of action on Monday.”

Door-to-door Garbage Collectors’ Union chairman OP Saini said, “We will not lift waste from households. Those who lifted garbage today have also been informed not to do so from tomorrow. We told MC officials to consider our demands, but they told us both decisions were implemented after being approved by the MC House. We have told them to bring the agendas again.”

Due to the strike, waste lifting from houses and sanitation in city were partially affected today. During a random check, it was found that garbage was not collected from houses in Sectors 33, 34, 37-C, 45-C, 38, Indira Colony, Mani Majra and other areas of the city. Waste was, however, lifted from Sectors 38-C, 49, 61 and 21.

“In some sectors, RWAs are managing the lifting of waste. Some collectors who did not know about the strike will now stop collected waste from tomorrow,” added Saini.

Hitesh Puri of CRAWFED said, “Residents are suffering due to the strike.”