Trio caught from Rajasthan by Operations Cell of UT police 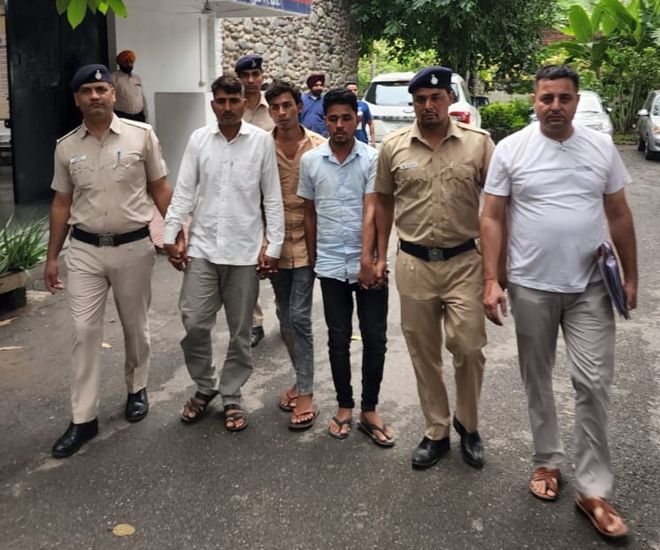 The accused in UT police custody.

Three members of a sextortion gang have been arrested by the Operations Cell of the Chandigarh Police.

The accused, identified as Mubin (39), Rashid (19) and Arjudin (24), all residents of Bharatpur district, Rajasthan, were nabbed from Rajasthan by a team led by Inspector Amanjot Singh, in-charge of the Operations Cell.

The victim, a resident of Sector 19, had complained that he received a WhatsApp message from a suspect, who claimed to be Archana Sharma, a government school teacher.

The suspect had candid conversation with the victim. He later received a video call in which there was a girl on the other side who lured the victim and asked him to remove his clothes. The victim then received threats in which the suspect asked him to deposit Rs 25,000 or else his objections videos will be uploaded on social networking sites.

During the course of investigation, the raiding party of the Operations Cell, Sector 26, Chandigarh, went to Kaithwara, Bharatpur district, Rajasthan, and nabbed three suspects.

Sources said arresting the suspects from that region involved a lot of risk as such gangs operate in syndicate to stop the police from entering the villages.

During interrogation, the suspects revealed that they were running a sextortion gang and had targeted people in Chandigarh and other states by recording their objectionable videos.

There are around 25-30 members in the gang who have used over 2,000 SIM cards in the past one year to cheat and extort money from people.

Extorting around Rs 50L per month

Bank details of the three accused revealed that they were extorting around Rs 50 lakh per month through sextortion racket and a majority of their money was invested in real estate.