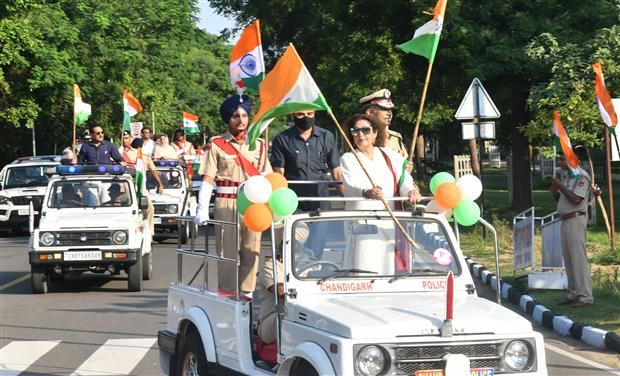 MP Kirron Kher, along with DGP Praveer Ranjan, leads a 'Har Ghar Tiranga' rally, which was flagged off from Sukhna Lake in Chandigarh on Saturday. Tribune Photo: Pradeep Tewari

The UT police organised a rally under the ‘Har Ghar Tiranga’ campaign, which was flagged off by MP Kirron Kher from Sukhna Lake.

UT Adviser Dharam Pal, DGP Praveer Ranjan and other officials of the Administration and the Police Department were present on the occasion.

A total of 75 vehicles of the UT police were part of the rally, which concluded at the Sector 17 Plaza where it was given a warm welcome by members of the Market Welfare Association.

The National Anthem was played at the end of the event.

Meenakshi Lekhi, Minister of State for External Affairs and Ministry of Culture, led a Tiranga Yatra carried out by the city BJP here today.

The march began at Sunder Nagar in Mauli Jagran and passed through Vikas Nagar and the Industrial Area before concluding at Daria. Various city BJP leaders and a large number of party workers took part in the march.

The yatra began from its office complex in Sector 9 and concluded at the Rock Garden, with patriotic slogans being raised en route. A large number of officers and staff members took part in the event.

Office-bearers of the Chandigarh Business Council today gave nearly 100 National Flags to its members for hoisting on their respective business premises, as part of Azadi ka Amrit Mahotsav.

All members pledged to hoist the Tricolour at their residence from August 13 to 15. CBC president Chander Verma said their members would continue to contribute towards the growth of the city and the nation.