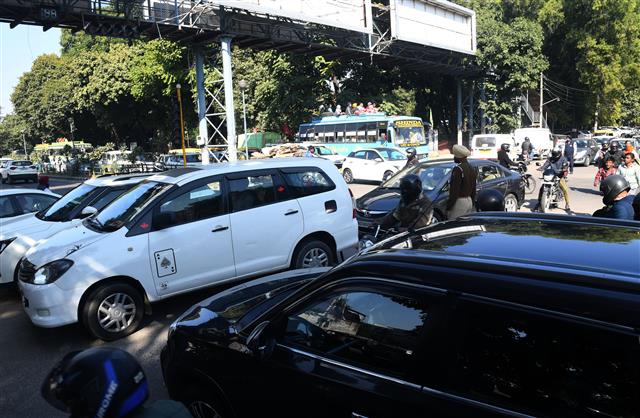 Traffic in a mess at a crossing in Phase 7, Mohali, on Saturday. Vicky

Around 15,000 farmers swamped the town in buses, car, private carriers, trucks and tractors since last evening to press for their demands on the second anniversary of the repeal of the three farm laws. By morning, there was a huge turnout, virtually a sea of yellow and green, in the open space near Gurdwara Amb Sahib.

By afternoon, protesters were on the roads, choking the flow of traffic and causing inconvenience to commuters. Being Saturday, most residents, who could avoid going out, remained indoors. People had to take detours as the YPS Chowk road was barricaded by the police. Much of the traffic jam was due to the vehicles, including trucks and buses, parked at several spots on the roadside. “The number of women protesters, especially elderly, was in huge numbers this time. We have not witnessed so many women during rallies in the past,” said a local sympathiser who helped the farm union members organise the event here.

Eyewitnesses said some youths and men consumed liquor near the vends and in open spaces.

The hub of the activity was YPS chowk, also known as Shaheed Lt Col Bikramjit Singh Shaurya Chakra Chowk, as every protester tried to make his presence felt by being there, holding a flag and raising slogan against the Centre.

Hordes and hordes of farm union members gathered here and moved towards the Chandigarh before they were stopped a little ahead due to heavy barricading.

Rajesh Marwaha, a Phase 9 resident, said, “If farm union members had to just give a memorandum to the Governor, what was the point in bringing in 15,000 people from far-off places. In such a cold weather, elderly farmers and women are being made to walk here and to hold flag only.”

Heavy police force was deployed since 5 am on the Chandigarh-Mohali border and remained there till late in the evening. The protest kept Mohali and Chandigarh cops on toes throughout the day.