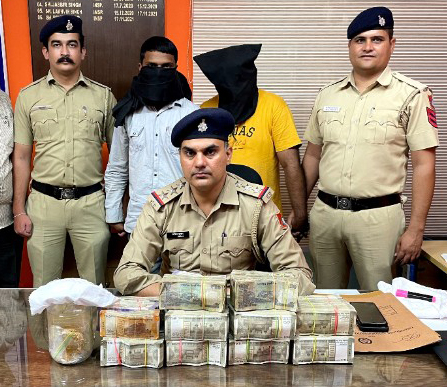 The cyber criminals in police custody in Chandigarh.

The police have arrested two cyber criminals and recovered Rs 35.70 lakh and jewellery worth Rs 12.94 lakh from them.

Parmar Rajeshji and his brother-in-law Chauhan Rattan, both natives of Gujarat, at present residing in Sector 47, were arrested by a team, led by Inspector Rohit Kumar, Sarangpur SHO. They were produced before the court today which sent them to five-day police remand.

The police had received a complaint from Ajay, who works with a bike taxi firm, that he was being used as a conduit by the accused to pick and deliver goods.

“In April, the accused siphoned off money from a Mumbai resident’s account after which they asked Ajay to visit an electronics store in Sector 26 and purchase two iPhones. They paid Rs 2.05 lakh to the store through an online payment app, but made Ajay submit his PAN details for the purchase,” the police said.

The duo immediately asked Ajay to visit the mobile market in Sector 22 and sell the newly purchased phones. “Ajay, who was working as a delivery agent, went to the market and sold the two phones for Rs 1.42 lakh and delivered the amount to the accused at an address in Sector 47. This modus operandi, converting money they siphoned off from their victims’ accounts into cash, was adopted by the accused to avoid getting tracked by the police. Transferring money to another bank account and then withdrawing it might have easily led the police to them,” the police added.

Meanwhile, Ajay, who was unaware of the modus operandi of the accused, got Rs 500 from them. The police said a case of cyber fraud was already registered against the duo in Maharashtra and they were also tracking the transactions made by the two.

On June 24, the police received information that the accused would make an attempt to get jewellery sold at a shop, following which they laid a trap and nabbed the duo.

They had bought gold articles worth Rs 12.94 lakh from a store in Sector 17 and made payment through the DigiGold payment gateway.

The police said the modus operandi used in the crime was known as the “angadia” system under which a person, generally called “angadia”, is used as a courier to send cash from one place to another.