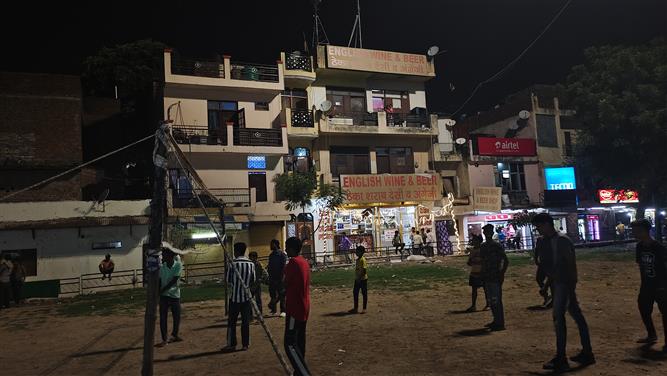 A liquor vend in a residential area at Mauli Jagran, Chandigarh. Ravi Kumar

Throwing norms to the wind, a contractor has merged two residential units to run a liquor vend at Mauli Jagran in the city, right under the nose of the Excise and Taxation Department.

During a survey carried out by the Chandigarh Housing Board (CHB) officials, it came to light the allottee of dwelling unit No. 1881 had resorted to violations by encroaching on government land and misusing the unit. Dwelling units 1880 and 1881 were found merged, an English wine and beer shop was found running from these units and balcony constructed on the first, second and third floors on government land.

Will act if CHB objects

If the CHB brings the matter to our notice about running of a liquor vend from residential units in violation of the norms, its licence will be cancelled, —Vinay Pratap Singh, Excise and Taxation Commissioner

For breach of the terms and conditions, the CHB has issued a show-cause notice for cancellation of allotment of dwelling unit 1881.

As per the terms and conditions of the allotment, the dwelling unit “shall be used for purpose as per allotment letter issued on March 29, 1993, and for no other purpose, and you can neither sublet nor make any additions/alterations therein without prior approval from the competent authorities”.

The notice stated the allottee had acted in contravention of the allotment norms and thus violated the rules and regulations under provisions of the Capital of Punjab (Development and Regulation) Act, 1952, and the Haryana Housing Board Act, 1971, as extended to Chandigarh and other Act and rules/bylaws as applicable from time to time. “You are informed the violations, encroachments, misuse, etc. carried out in the dwelling unit are hazardous in view of structural stability, fire safety, light and ventilation, which can be an obvious cause of any unpredicted dangerous situation,” stated the notice, directing the allottee to immediately remove all such violations.

An official of the Excise and Taxation Department said location-specific permission was generally granted for liquor vends. Excise and Taxation Commissioner Vinay Pratap Singh said if the CHB brought the matter to their notice about running of a liquor vend from residential units in violation of the norms, the licence of the vend would be cancelled. During a recent survey carried out by the CHB of over 18,000 flats allotted under various schemes, 895 units were found occupied illegally by others.

After complaints of some allottees having sold or transferred their flats illegally, the CHB conducted the survey of all such flats over two months. These flats cannot be sold or transferred. Of the total 18,138 flats surveyed, 15,627 were found occupied by the original allottees.