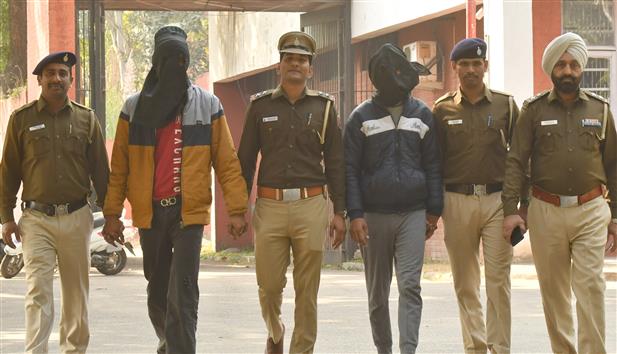 The suspects in police custody on Tuesday. Photo: Pradeep Tewari

The UT police have arrested two vehicle lifters and recovered 15 Bullet motorcycles stolen from Chandigarh and Mohali. Cops claimed to have worked out six cases of vehicle theft registered in the city with their arrest.

The police said with a rise in vehicle thefts, a team was constituted to develop leads regarding gangs operating in the area. During the exercise, the footage of CCTVs in the areas falling under the jurisdiction of the Sector 36 police station was scrutinised in which the suspects were seen.

The police said the leads were developed and a trap was laid. Sanadar was nabbed while riding a Bullet motorcycle, which was found to be stolen from Sector 42.

During his interrogation, he revealed information about his accomplice Amritpal following which he was arrested too. A total of 15 motorcycles, valued around Rs 22 lakh, were recovered on their disclosure. The police said the suspects used to steal motorcycles from Chandigarh and Mohali and further sold them in the rural areas of Ferozepur and Tarn Taran districts.

“The suspects used to take token money for selling stolen bikes and promised to hand over the documents at the time of taking the final amount. However, they never used to demand the final payment since they didn’t have documents,” said a police official. The police said the suspects were drug addicts and used to commit crime to fulfill their drug needs.