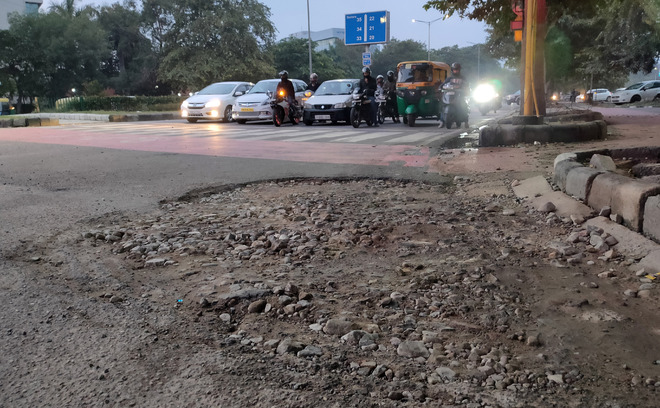 A damaged portion of the Dakshin Marg at the Sector 30-32-20-33 roundabout in Chandigarh on Saturday. Tribune Photo: Pradeep Tewari

Chandigarh roads may have been in news for their bad condition, but the UT Administration could not spend Rs 2 crore (in the last three fiscals) allocated for development of national highways by the Ministry of Road Transport and Highways. The funds have now lapsed.

The road stretch (Dakshin Marg) starting from Zirakpur side and leading up to Piccadily Chowk, and further towards Mohali is a national highway. One can easily spot broken patches on this highway.

A sum of Rs 5 crore sanctioned for the Tribune flyover this fiscal, too, remained unutilised as work on the project was stopped following the Punjab and Haryana High Court’s stay on uprooting of trees.

Chief Engineer of UT Mukesh Anand said: “Whatever funds required were used. As far as the Tribune flyover is concerned, work could not be started.”

While funds have lapsed, some road stretches are still in bad shape. During a random check, it was found that the national highway at the Sector 30, 32, 20, 33 junction.

“Officers remain confined to their offices. They do not make field visits. Quality material is not being used. The national highway has been in a bad shape in Sector 34. Besides, broken railings can been witnessed in several areas,” said Federation of Sector Welfare Associations Chandigarh (FOSWAC) Chairman Baljinder Singh Bittu.

Meanwhile, Anand said the Tribune flyover funds would get carried forward but the previous years’ funds had lapsed.