Want authorities to identify sites for their rehabilitation first 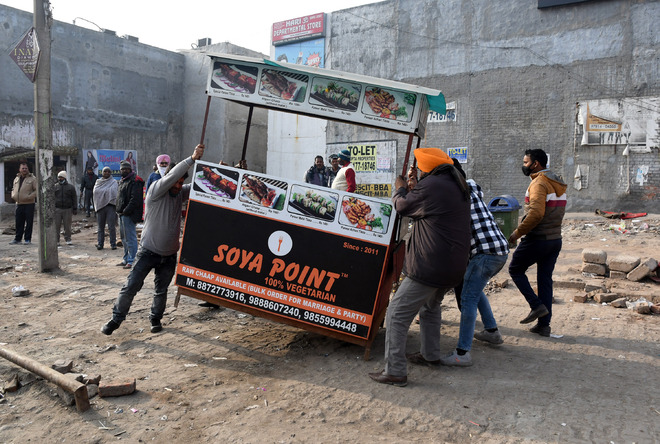 A rehri being removed from a site in Sector 20, Panchkula, on Wednesday. TRIBUNE PHOTO: NITIN MITTAL

Asking the authorities to first identify a vending site for their proper rehabilitation, street vendors in Sector 20 put up a resistance against an anti-encroachment team of the Haryana Shehri Vikas Pradhikaran (HSVP) and the Panchkula Municipal Corporation (MC) and the district police.

Onkar Singh, who runs a food stall, said street vendors were being harassed by the district authorities during the festive season.

“Action is being taken without serving a prior notice. The authorities had earlier told us to continue our business at these places as they don’t have sites to allocate to us,” he said.

An official of the HSVP said they were targeting encroachers in parts of the city as per the planned schedule of an anti-encroachment drive in coordination with the MC and the police.

“We have also taken photographs of those occupying corridors, roads and pavements. We will serve a notice on the offenders,” he said.