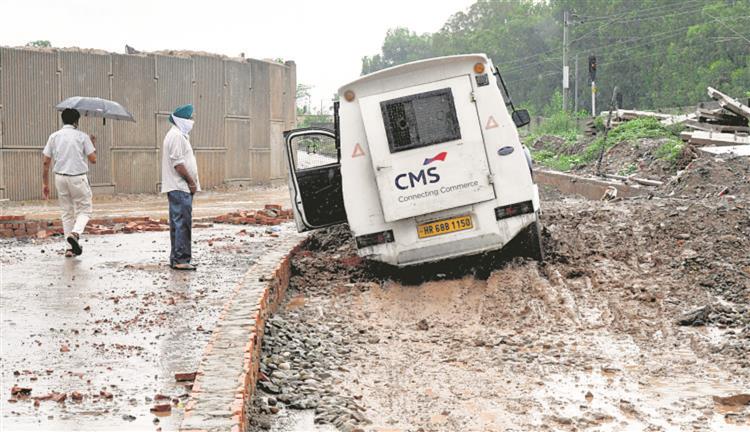 A cash van stuck in mud at Sector 19 in Panchkula. Photo: RAVI KUMAR

With rain lashing the city overnight, rainwater entered houses in Sector 19 and left streets in the area inundated.

Furniture and electronic items were damaged in several houses.

Cars and bikes parked outside houses were in knee-deep water and were damaged. As a result, many could not go to their offices and business outlets.

The scene at Abheypur, Budhanpur and other low-lying areas was no different.

Residents in Abheypur, which recently witnessed the outbreak of cholera due to contamination of drinking water, are once again not sure whether the drinking water would be safe as several places were inundated.

“When most residents were busy enjoying the pleasant weather and rain, we were busy draining out water that entered our houses. Our houses got flooded and furniture was damaged,” Harish, a resident of Sector 19, said.

“There was no place to go to in the middle of the night. The authorities concerned were not picking up calls,” another resident said.

Harinder Malik, councilor from Ward No. 8, said, “Rainwater started entering houses of those living in HSVP plots and the area adjoining Baltana around 1 am. On receiving information, I rushed to the affected areas.”

The BJP councillor said he himself tried calling the officials, but nobody responded.

“I had to call up local MLA and Haryana Speaker Gian Chand Gupta asking him to direct the officials concerned to drain out rainwater from the affected areas,” he said.

In other parts, vehicles had to wade through waterlogged roads and roundabouts.

SK Nayar, president of the Citizens Welfare Association, said, “The Panchkula Municipal Corporation is solely responsible for the prevailing situation that erupted due to overnight rain. Civic body officials didn’t act on time. They were too late in issuing tenders for cleaning of road gullies.”

MC Commissioner Dharamvir Singh said as the sector in question was a low-lying area, it got flooded during heavy rain.

“We will make a concrete plan to address the issue. For now, we have deployed teams, which will work round the clock to drain the water from the area,” he said.