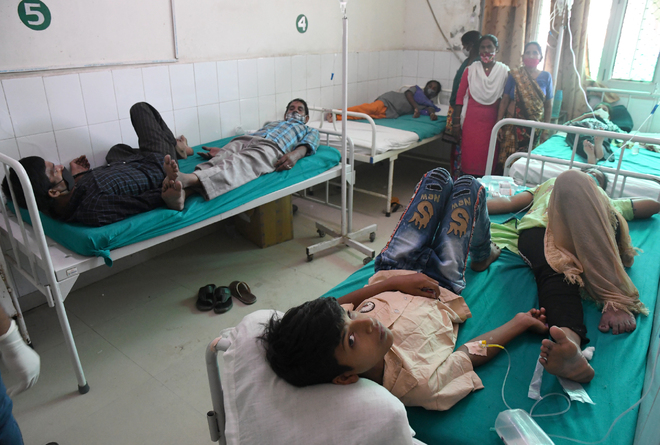 Patients under treatment at the government hospital in Dhakoli, Zirakpur, on Wednesday.

For the second month running, the Zirakpur area has been struck by an outbreak of cholera, this time in Peermuchalla, the health authorities confirmed today.

Seven of the 10 water samples collected from several places in Peermuchalla have failed the laboratory test, confirming bacterial contamination.

“It is a cholera outbreak. The blood and stool samples collected from patients have confirmed it. Seven of the 10 water samples were found unfit for drinking,’’ said Dr Adarshpal Kaur, Civil Surgeon, Mohali.

Over 200 patients have been given medical treatment for diarrhoea-like symptoms in the area. Residents said the number could actually be much higher as patients chose to visit Dhakoli, Panchkula, Zirakpur and Chandigarh hospitals.

Residents have been complaining about dirty water supply with foul smell, but Zirakpur Municipal Council officials maintain that there has been no written complaint and no leakage has been found in pipelines.

An MC official today said all seven water samples that had failed the test were from individual submersible pumps installed at homes.

“We are undertaking chlorination of MC as well as private water tanks. A thorough check of pipes will be done again and the water supply will be restored only after the samples are cleared,” said Kulwant Singh, junior engineer, Zirakpur MC.

Cholera is an acute diarrhoeal infection caused by ingestion of contaminated food or water with the vibrio cholerae bacterium.

21 Patients admitted to the CHC, Dhakoli

The water supply has been disconnected. Alternative water arrangements through tanks have been made. The Dera Bassi SDM has asked the MC to look into the cause of contamination in 48 hrs.

It is a cholera outbreak. The blood and stool samples collected from patients have confirmed it. Seven of the 10 water samples were found unfit for drinking. — Dr Adarshpal Kaur, Civil Surgeon, Mohali