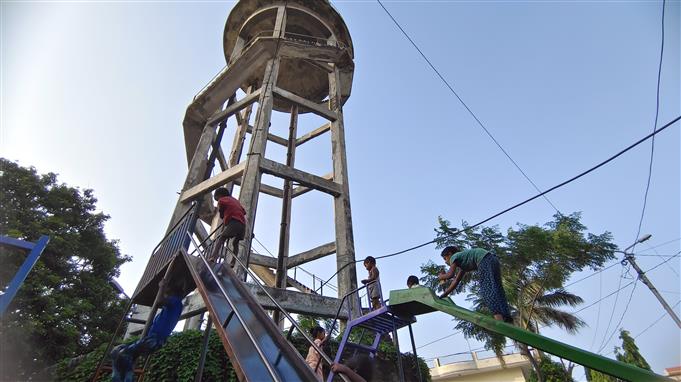 This 1971-built overhead tank at Pabhat has been in disuse for the past 20 years. RAVI KUMAR

Overhead water tanks in a dilapidated condition, electricity poles leaning precariously, roads riddled with potholes and government health facilities almost non-existent — that’s the state of the infrastructure in Zirakpur in a nutshell.

A day after a 28-year-old shopkeeper of the VIP Road market was electrocuted at a roadside transformer, resentment prevailed among the local residents.

“The basic infrastructure in the town is going from bad to worse. It is better to rename this place as Slumpur or Jampur,” say residents.

“Politicians are busy settling scores over petty issues. Officials of the administration are invisible and the Municipal Council does not care,” they added.

An electricity pole leaning over a tin shed of a tea stall in a waterlogged street of the godown area at Pabhat has failed to move officials of the PSPCL for over a year.

As many as three overhead water tanks at Pabhat, Baltana and Dyalpura are lying unused for decades. A Pabhat resident said the 1971-built overhead tank had been in disuse for the past 20 years.

“Old timers say Congress leader and later President of India Giani Zail Singh inaugurated the tank. After that, tube-wells were installed. The cement is crumbling. The iron inside the pillars is rusted. It can collapse anytime. We have been pleading with the MC authorities to dismantle it, but out pleas have fallen on deaf ears,” he said.

Sources said the MC, in the recent House meeting, had given its nod to dismantling the three overhead tanks.

More than a year has passed since the announcement was made that the Community Health Centre in Dhakoli would be upgraded to a subdivisional hospital, but there has been no progress.

A day after a shopkeeper was electrocuted, ADC (Urban Development) Pooja Syal visited the Zirakpur MC office on Monday. She sought a detailed report on the actual cause of the accident.