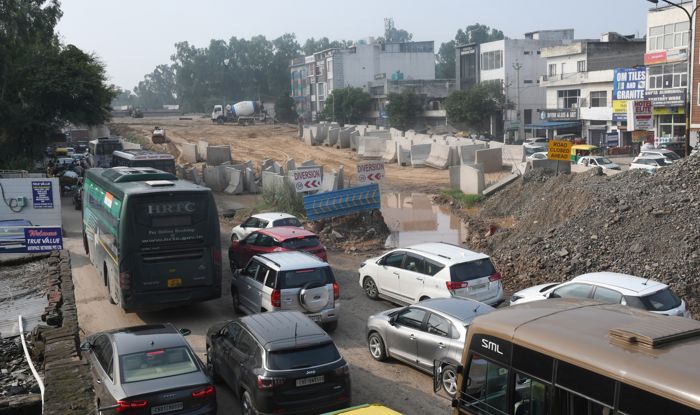 Snarl-ups are commonplace on stretch towards Chandigarh

Motorists using the Chandigarh-Zirakpur highway will have to endure more snarl-ups as the under-construction vehicular underpass has missed its August deadline. The tentative date for completion of construction work was August 3.

Going by the current pace of work at the site, around five more months will be required to complete the project.

At present, the underpass and structure from the Zirakpur side have been erected, but the construction of the retaining wall is yet to begin on the Chandigarh end. Just ahead of the Chandigarh border, concrete tiles are being prepared as of now.

Sources said owing to the monsoon season, slush and labour shortage had resulted in tardy pace of construction work. Earlier, PWD officials had said rising sand rates and shortage of earth due to mining restrictions had led to the delay.

“Very few workers, mostly those preparing concrete tiles for the wall, are seen at the site these days. Apart from that, the construction work is moving at a snail’s pace,” said Parminder Singla, a Pabhat resident.

Thousands of motorists who commute daily on the stretch have been facing inconvenience for almost nine months now with traffic crawling due to congestion and bottleneck at the site.

The PWD has failed to streamline both sides of the road. While the section from Chandigarh to Zirakpur is slightly better, the opposite road is a mess with potholes across the stretch and concrete jutting out of berms. Wary of damage to vehicles, motorists tread slowly on the section, leading to traffic jams.

It often takes commuters heading to Chandigarh 30 to one hour just to clear the 450-metre stretch owing to the poor condition of the service lane and plying of heavy commercial vehicles in the Pabhat area.

A PWD official involved in the construction work said: “Due to the rainy season, filling and setting of earth get delayed. There are still some issues with the availability of earth. Some permissions related to service lane are pending from Delhi. The underpass will be ready by October-end.”

Around 65-70% work has been completed, but PWD officials insist it is just a matter of two more months as raw material has been procured and the “assembly phase” is not much time consuming.

The underpass is being built on the Zirakpur side of the national highway. The project, slated to cost around Rs 10 crore, is aimed at facilitating the movement of heavy vehicles coming from the Pabhat godown area. It will remove the permanent black spot on the highway.

Will be ready by Oct

Due to rainy season, filling and setting of earth get delayed. There are issues with availability of earth. Some permissions related to service lane are pending. It will be ready by October-end. — A PWD official