A rocky countdown to Independence

The days preceding Independence were marked by disturbances in Punjab as the Partition took its toll on law and order and displaced millions of people. The Tribune, then published from Lahore, continued to operate under the ‘most trying circumstances’. The newspaper defied all odds to keep its readers informed. From today till August 15, we are republishing 75-year-old news reports, which serve as the real chronicle of those turbulent times from ground zero. 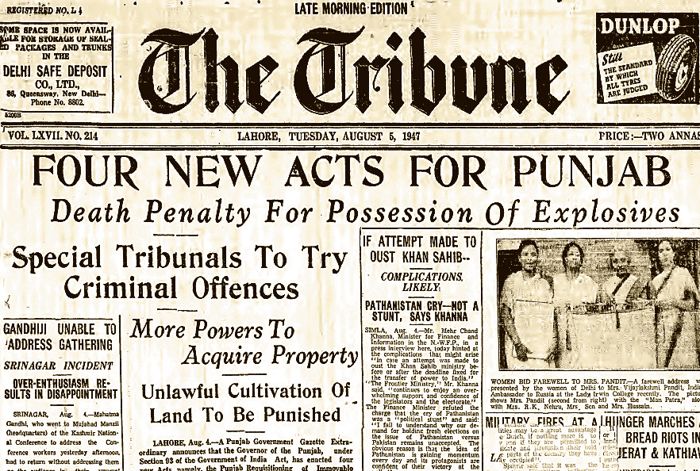 criminal offences: Punjab enforced a law for the setting up of special tribunals. (August 5, 1947)

From The Tribune archives

The first Act provides temporarily for the requisition and acquisition of immovable property; the second aims at punishment of unlawful cultivation of land and ejectment of trespassers therefrom; the third provides for the setting up of special tribunals for the trial of criminal offences; and the fourth amends the Punjab Disturbed Areas Act so as to provide capital punishment for the possession and manufacture of explosive substances for unlawful purposes.

The enactment of the Land Trespass (emergency provisions) Act has been necessitated by the widespread disorders that have taken place in Gurgaon district, where a large number of villages have been burnt down, as a result of which there has been evacuation of the local population from such villages, while other villages have been vacated out of fear.

It has been found in many cases, says the statement appended to the Act, that the fields of villages which have been evacuated are being unlawfully cultivated by men of neighbouring villages and this usurpation of rights has been complicated by the fact that in all such cases the usurpers belong to a different community.

The existing civil, criminal and revenue law is inadequate to deal with this situation since the procedure is lengthy and in the case of criminal law the punishments are inadequate.

The absence of a speedy remedy for such a situation is hampering peaceful resettlement of the evacuees in their own villages.

‘Military on the job’

LAHORE: “Let me assure you that when the military is out on their job, they are not out for fun. They mean business and they will do their job as best as they have always done. They will act sternly and of course impartially.” Thus observed Major Gen T.W. Rees, Commander of the Punjab Boundary Force (P.B.F.), which has been created for the purpose of maintaining law and order in districts of Punjab.

Major Gen Rees made these remarks at a press conference. Along with him were present Brigadier Mohd. Ayub Khan and Brigadier Digamber Singh Brar, O.B.E., representing the Pakistan and Indian Unions, respectively. These two senior military officers will act as advisers to Major Gen Rees.

Major Gen Rees said that as agreed by both Dominions, a special military force had been set up; it would work directly under the Supreme Commander (Commander-in-Chief till August 14, 1947). This force, he said, was to work in aid of the civil administration, and was responsible for the maintenance of law and order in those areas of Punjab which were included in the civil districts of Lahore, Amritsar, Gurdaspur, Hoshiarpur, Jullundur, Ludhiana, Ferozepur, Montgomery, Lyallpur, Sheikhupura, Gujranwala and Sialkot. The force will continue to hold the responsibility of maintaining law and order until a date to be specified later. He said it was a neutral force and so were its chief officers and, he undoubtedly hoped, its men.

The force has its headquarters at Lahore. The troops employed in this force are Indians of mixed-class composition; in addition to Major Gen Rees, the other senior commanders are British officers.

The intention, said Rees, is that the force shall remain on this impartial task under the direct orders of the Supreme Commander, and only on the conclusion of its task will its units be drafted off to the Armies of the two Dominions.

The Commander of the force, who has firm faith in the discipline, reliability and impartiality of his officers and men, earnestly requested for the goodwill and cooperation of people of all castes and creeds from among the civil population in the task of maintaining law and order in the districts of both Dominions entrusted to him and his force.

Meanwhile, throughout the areas involved, the present legal position will continue as regards emergency powers and legislation, and the powers of offices and troops (as well as the police) under the statute will be as extensive as hitherto.

SIMLA: Mr. Mehr Chand Khanna, Minister for Finance and Information in the North West Frontier Province (N.W.F.P.), has hinted at the complications that might arise “in case an attempt is made to oust the Khan Sahib ministry before or after the deadline fixed for the transfer of power to India.”

“The Frontier Ministry,” Mr. Khanna said, “continues to enjoy overwhelming support and confidence of the legislators and the electorate.”

He refuted the charge that the cry of Pathanistan was a “political stunt” and said: “I fail to understand why our demand for holding fresh elections on the issue of Pathanistan versus Pakistan remains unaccepted. The obvious reason is that the idea of Pathanistan is gaining momentum and its protagonists are confident of their victory in the polls.”