Champions of a cause 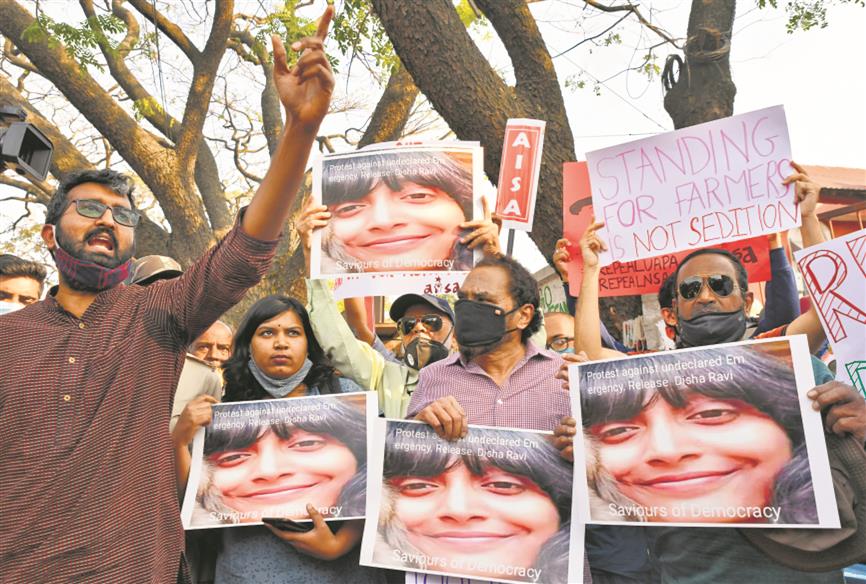 New ‘enemy’: The government has opened up another front — this time it is environmentalists and the youth. Reuters

The Public Concern for Governance Trust (PCGT), an NGO set up in Mumbai some 20 years ago, works mainly with college youth and aspires to turn them out into good human beings and citizens steeped in values of truth, honesty, compassion, justice and service to others. Many of these students display leadership qualities that the NGO tries to nurture. The story of Disha Ravi would interest the PCGT’s trustees. She had a particular interest in environmental issues and, simultaneously, she possessed a determination to make a difference in that field. The PCGT has no expertise, neither does it possess the wherewithal to advise an environment activist on how to pursue her dream, but it is her leadership qualities that it would nurture and encourage.

Activists are a thorn in the side of the government. If they could be silenced because of fear, there would be very little opposition to whatever plans it has of reshaping India.

The country needs enthusiasts in different fields and disciplines. Environmental issues, particularly climate change are matters of concern. Every child in school knows about ‘sustainable development’. They understand that runaway development without concern for nature is the cause of climate change and manmade disasters, like the one that struck Chamoli district in Uttarakhand last week.

Disha Ravi is one of the thousands of young people who have been conditioned by their teachers in schools to think of the plight of future generations. But she is one in a thousand who had adopted this concern as her mission in life. The PCGT would commend her for her commitment to a worthy cause. The Modi-Shah duo should do likewise. That great statesman-politician, Atal Bihari Vajpayee, would have done that!

Because she was gifted with special qualities of leadership (just as Modiji is gifted in the arena of politics) and because of her deep concern for the future of our planet (a quality she shares with Swedish teenager Greta Thunberg), Disha motivated her friends in Bengaluru, and later, through a movement of youth christened Fridays for Future (FFF), to stand up for nature and prevent it from being ravaged by undiluted ‘development’.

It is understandable that a government bent on ‘development’ should take note of a little wisp of a girl who, like her role model, Greta Thunberg, was attracting the attention of young people in Delhi and other parts of the country. The Indian government, used to having its own way because of the overpowering presence of its undisputed leader would have marked her out for eclipse in the not-too-distant future.

The opportunity seems to have arrived sooner than expected. The farmers’ protest, which I am certain Disha would not have been too concerned about, was seen as a god-sent opportunity by organisations of Sikhs settled abroad to revive interest in the Khalistan movement since the farmers enjoyed the support of a majority of people of the land.

A certain Mo Dhaliwal, a naturalised Canadian of Sikh descent, allegedly approached the innocent girl activist and lured her to join him to fashion a ‘toolkit’ for the farmers’ agitation. A toolkit explains to the ignorant what the agitation is all about and draws up an action plan for the farmers and others to follow.

This toolkit was shared by Disha with her friend, Greta, who, in turn, tweeted approval publicly, thus bringing the toolkit to the notice of our intelligence agencies. Rejoicing at this unexpected ‘gift’ that fell into its lap from Sweden, the government and its striking arm, the Delhi Police, bided their time till the weekend to arrest the exuberant Disha, aged 22, in Bengaluru. They whisked her away to Delhi without obtaining a transit remand from a local Magistrate as more responsible police forces are wont to do and are expected to do.

Disha is not a criminal! If anything she is like a policewoman ferreting out crimes against nature. If activists like her are going to face charges of sedition, the future of this great country is bleak, too bleak to imagine! Already, parents in Delhi are reported to have decided to stop their children from attending the weekly sessions of FFF that had made them aware of the dangers of interfering with the environment beyond a point.

Perhaps, the government wanted this young girl’s efforts to stop. Her work was presenting too many obstacles to ‘development’. Children were being influenced to the point of being ‘brainwashed’. In July 2020, the Delhi Police had taken down the website of the FFF (India) but restored it soon when protests mounted. What probably irked the government is that the FFF had taken a strong stand against the draft Environmental Impact Assessment notification of 2020 that reduced public consultation on projects and allowed ‘post-facto’ environmental clearance.

By putting Disha away, the government could kill more than one bird with a single stone! It would prevent her movement against environmental damage from spreading, it would saddle the farmers’ protests with a Khalistan tag because of Disha’s unintended association with Dhaliwal of the Poetic Justice Foundation, a pro-Khalistani Sikh group, and, perhaps unintendedly, also discourage the tribes of activists who abound all across the country and take up a whole range of issues. The activists are a thorn in the side of the government. If they could be silenced because of the fear that the government has generated everywhere in the land, then there would be very little opposition left to whatever plans it has of reshaping India. And if it required a 22-year-old enthusiast to be sacrificed for the cause, so be it!

The government has opened up another front after their campaign against farmers, journalists and Muslim lovers! This time, it is environmentalists and the youth.