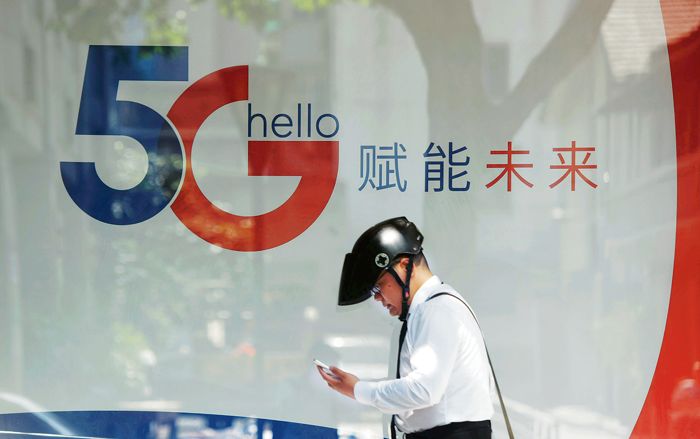 Handle with care: Two primary considerations must weigh with prospective buyers of 5G like India: expense and national security.

The world is on the threshold of major technological advances, with the clear promise of transformational changes where, over the next couple of decades, technology will drive almost every aspect of life. Signs are already visible in a variety of areas including robotics, artificial intelligence, telecommunications, Internet of Things, unmanned automobiles, etc., with many countries in the race. Fifth Generation, or 5G, information and communications technology is viewed in the West as the next big change after the Industrial Revolution. A report issued by the Asia Studies Centre in the UK in May 2019 anticipated that 5G wireless networks will deliver a profound change in latency, data speed and volume, allowing for new technologies — such as agricultural or delivery drones, self-driving vehicles, and other data-driven tech.

The 5G equipment is integrated, complicated and will play a major part in the economic and national security of countries. Security concerns arise because civil and military communications will flow through it and it is much faster than 4G with huge numbers of channels and will link literally millions of pieces of equipment in the world. The recent announcement that China’s military and state-supported telecommunications company Huawei would take part in India’s 5G trials, therefore, raises serious doubts whether the decision’s full implications have been understood.

Substantive reports since before 2012 have referred to Huawei’s close ties with China’s military and intelligence establishments. China’s official newspaper Global Times on December 31, 2019, confirmed these links while reporting management and board-level changes as part of what has been called a ‘proactive strategy’ as Huawei prepares itself to fight a prolonged tech war with the US. Huawei founder and former PLA engineer Ren Zhengfei and his daughter Meng Wanzhou, who was Huawei’s chief financial officer, stepped down. Among others who opted out were Sun Yafang, formerly Huawei’s chairperson who worked in China’s external intelligence agency, the Ministry of State Security, and has been described as Zhengfei’s ‘most trusted deputy’. She studied at the radio technology department of the Chengdu Institute of Radio Engineering, which was till recently under the joint management of the PLA general staff department. Another is Eric Xu Zhijun, deputy chairman of Huawei Technologies, who, according to the South China Morning Post, was accused in a lawsuit filed by the Silicon Valley chip startup CNEX Labs of taking part in a conspiracy to steal its trade secrets.

China’s ambition is to establish regional predominance and rival the US. More pertinently, it is an adversary with an unresolved border dispute intent on enforcing its territorial claims on India. It has forged almost symbiotic ties with Pakistan, with collaborations enveloping the entire gamut of military, intelligence, economic, diplomatic, nuclear and other areas. In addition, it denies India its legitimate place in international organisations like the UN and NSG. Since August, China is supporting Pakistan by taking up the issue of Kashmir in the UN. Yet, this decision allowing China to participate in 5G trials permits it entry into India’s critical telecommunications sector!

Benefiting from China’s civil-military fusion programme, preferential agreements for land and loans from Chinese banks, Huawei has grown rapidly to emerge as China’s leading telecommunications company. The two PLA-affiliated information and telecommunications companies, Huawei and ZTE, are exerting to roll out 5G networks across the world, with Huawei already present in 50 countries.

China is already using AI and big data to develop smart city technologies to track and shape the political behaviour of its population. Huawei will play an important role as China works towards developing AI for ‘predictive’ battlefield capability and upgrading the PLA from an ‘informationised’ to an ‘intelligentised’ force. Huawei is establishing AI nodes in approximately 30 countries along the digital Belt and Road Initiative.

Experts state that unlike the old 4G, where antennae were on the periphery away from the core, the 5G network relies upon a complicated series of multiple-input/multiple-output (MIMO) antenna integrated with the hardware and software required for transmission and reception of radio signals, and signal processing algorithms. The key to MIMO and the ability to control multiple data streams using the same time and frequency resource is the antenna. Experts say it is possible for the systems provider to insert a ‘backdoor’ within the antennae and allow it to stay dormant till required. It is unlikely to be detected by even technically advanced agencies. The China Electronics Technology Group Corporation, a state-owned defence conglomerate, produces antennae and microwave equipment for Huawei’s 5G.

Two main considerations must weigh with prospective buyers of 5G like India — expense and national security. There are presently very few 5G providers. Ericsson and Nokia are the two European companies and Huawei is the other. However, 5G equipment supplied by Ericsson and Nokia cost nearly twice as much as Huawei. Meanwhile, Taiwan, Vietnam and Samsung are about to ready their systems. India, therefore, has three choices: pay almost double the cost for ensuring national security, if it feels European companies are less likely to succumb to government pressure to intercept communications; upgrade the existing 4G system, which is feasible but will not give the same speed and capabilities as 5G; and opt to continue with the present system till it develops 5G indigenously or purchase the lower-priced 5G from South Korea, Taiwan or Vietnam. India will take two-three years to develop its own 5G system, and since it does not yet have technology for imminent use, it can afford to wait. India, like Japan, could also explore the feasibility of collaborating with either of these three countries.