Heartening to see the third pillar of democracy asserting itself 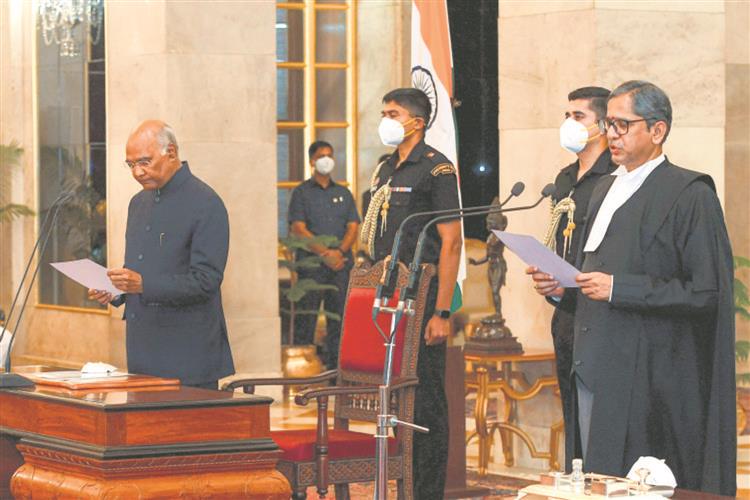 Reassuring: The elevation of Justice NV Ramana as the CJI has introduced a discernible change in the way justice is being delivered. PTI

The elevation of Justice NV Ramana as the Chief Justice of India has introduced a discernible change in the way justice is being delivered by the judiciary. This was first noticed in the process of selection of the CBI chief. It gave the people hope that the third pillar of democracy is asserting itself, as it is expected to do, specially at such times when the political executive is misinterpreting the Constitution and the laws to suit its own ends.

I think of officers who continue to keep the flag flying. Their numbers are dwindling. But people cling on to them in the hope of getting justice, which is what IPS officers were specially recruited to dispense.

Take, for instance, the remarks made in open court by Justices Hemant Gupta and V Ramasubramanian when turning down the demand of the former Police Commissioner of Mumbai for transfer to the CBI the investigation of cases filed against him in Mumbai by sundry complainants. Why the CBI? For one, the ex-Commissioner had asked for the allegations he had made against the state’s Home Minister to be inquired into by the CBI and the Bombay High Court had obliged.

The court’s decision was a good one because you cannot expect the state government’s agencies to establish the truth when its own Home Minister is the object of suspicion. The minister was accused of summoning two junior officials of the police’s Crime Branch to his house and tasking them with collecting Rs 100 crore every month from bar owners and such like who tweak the law for financial gain.

When the former Commissioner was removed from the coveted position held by him, he abandoned his comfort zone and dashed off a letter to the CM in protest. In that letter the details of the minister’s design to strengthen his party’s coffers through encouragement of criminality were laid bare. The name of the two junior officials who had been tasked with the collections were also disclosed. One of the two was Sachin Vaze. The exact contents of the letter have not been published. Vaze was the closest confidant of the chief! When Vaze botched up, the ex-Commissioner had anticipated an unhappy turn of events. He had recorded his conversation with Vaze and the other police Inspector in which allegedly the demand for Rs 100 crore was mentioned. He wrote to the CM and simultaneously released a copy of his letter to the press.

The Leader of the Opposition in the Maharashtra Vidhan Sabha, BJP’s Devendra Fadnavis, denounced the three-party alliance ruling the state — the Shiv Sena, NCP and Congress. When he was the CM earlier, Fadnavis had made use of the same officer, Param Bir Singh, first to justify the state’s action against the left-oriented activists arrested in the Bhima Koregaon conspiracy case, and later, when the officer was appointed Director, Anti-Corruption Bureau, to absolve NCP’s Ajit Pawar in a big irrigation scam, in an attempt to cement a political alliance. It was in the interest of his (Fadnavis) party to ensure that Anil Deshmukh, the Aghadi’s Home Minister, was reviled. So, the BJP welcomed back into its camp the ex-Police Commissioner with open arms.

It is an open secret that in recent years the CBI has been used by the party in power. So, when the High Court of Bombay ordered the inquiry into the ex-Commissioner’s accusations against the minister to be assigned to the CBI, the former Commissioner could not but have been in seventh heaven.

But the state government counter attacked with three or four complaints of selected victims against the ex-Commissioner. Two former Inspectors, one cricket bookie and one real estate agent were lined up with their own individual grievances of extortion against the officer when he was Commissioner of Thane three-four years ago. The state’s investigation agencies were entrusted with the investigations. Param Bir Singh approached the Supreme Court for relief, knowing well that the state’s police units are as caged in the state as the CBI is at the Centre. While turning down his request, the judges remarked that ‘those who live in glasshouses should not throw stones’. How did the judges conclude that both, the accused and the accusers, lived in glasshouses, a sentiment shared by the rank and file of the Thane and Mumbai police?

When two prominent residents of the SC-dubbed glasshouses join hands, if one of them relies on a specialist to do hatchet jobs of unlawful content and that hatchet man trips up in a crucial operation, because by now he has begun believing in his own invincibility, the denouement is bound to follow.

Faced with unexpected and sudden ruin, the resident resorts to his own instincts of survival. And here, too, he meets a dead end as the judiciary is in no mood to oblige.

The disgraced minister, whose cash-for-transfer policy was universally known to all ranks of the police force he was chosen to administer, hopes to get off the hook because presently it is one man’s word against the other. At this moment of time, his opponent in the adjoining glasshouse has a slight advantage because of the recorded evidence.

The bar owners would have to shut shop if they had to pay these added imposts to the legally mandated taxes they pay. A sharp increase in protection money would be a novel way of combating the crime itself. Only combating the crime was not the intent of the two occupants of the glasshouses!

The entire episode has left a sour taste in the mouth. I was always proud to proclaim my membership of the elite IPS, which I joined in 1953. But opting for positivity of the type our PM preaches, I think only of those officers who continue to keep the flag flying. Their numbers show signs of dwindling. But people cling on to them in the hope of getting justice, which is what IPS officers were specially recruited to dispense.