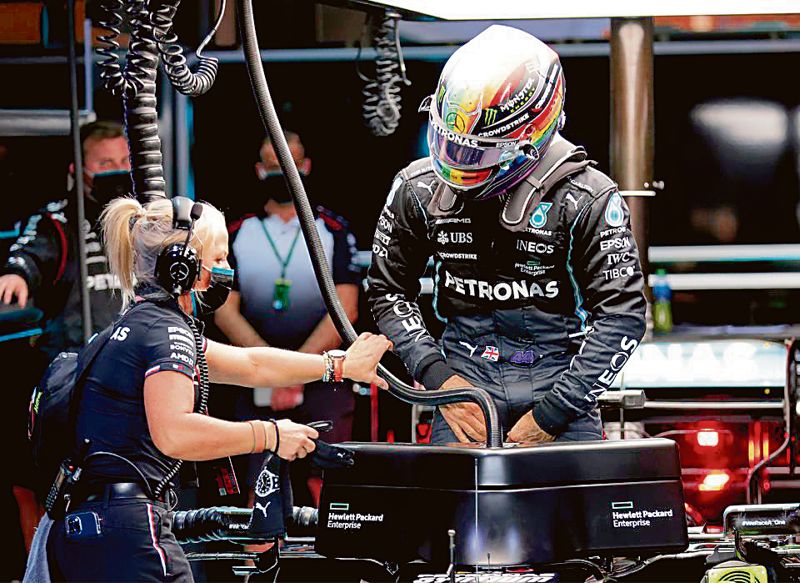 Lewis Hamilton has been wearing a rainbow-coloured helmet to show his support for the LGBTQ community. Reuters/File

BRITAIN’S Lewis Hamilton, the seven-time Formula-1 champion, has spoken for the rights of the LGBTQ community. To do that in most of Europe would be prosaic, even superfluous. To do that in Saudi Arabia — and publicly, as Hamilton did — requires a special kind of moral conviction.

Hamilton said that ‘religions can change, rules can change’. Saying such things in Jeddah, of all places, is likely to excite anger. Hamilton is prepared for that — to provoke conversations, even if such conversations are controversial. “Spark the conversation. Creating that uncomfortable discussion that is needed in those places,” the Briton said.

“If anyone wants to take time to read what the law is for the LGBT+ community, it is pretty terrifying,” Hamilton added. “I believe everyone should have equal rights, freedom of speech, freedom of movement. And there are places where that’s not allowed. Places such as here where the LGBT+ community... There’s prison time, the death penalty and restrictions for people being themselves.”

Hamilton, a multimillionaire sportsperson tourist in Saudi Arabia, has the immunity that global fame provides. He knows that his utterances, which scoff at the religion-based law of the land, will not cause him trouble. Yet, speaking out for the rights of the LGBTQ community of Saudi Arabia, which is under the threat of the death penalty, is something he did not need to do. He could have, like other celebrities who visit the kingdom, quelled his conscience, censored his own words, and got back to Europe without causing a public relations incident.

Hamilton, however, could not quell his conscience. Being a victim of bullying and racism all his childhood, and during part of his life after success as a driver too, he’s painfully aware of what it feels like to be treated like a criminal without committing a crime.

Hamilton, if he visits India, might see injustices which we have become blind and desensitised to — if he speaks out against them, we must welcome the conversation.

The lesson of the story is that the word of a sportsperson — a role model admired by millions of people — carries great strength. It can be used to bring about a positive change. This power must be used by sportspersons, for they owe it to their fans and society.

Hamilton’s outspokenness is a reminder of the quietude of our sports stars over communal or social issues that have been roiling India.

When American pop star Rihanna tweeted in support of the farmers’ protest in February, several of India’s best-known sportspersons, in unison as if moved by an invisible string, wrote posts on social media that had one message: ‘Do not talk about this.’

Using the hashtags #IndiaAgainstPropaganda and #IndiaTogether, Sachin Tendulkar wrote on Twitter: “India’s sovereignty cannot be compromised. External forces can be spectators but not participants. Indians know India and should decide for India. Let’s remain united as a nation.” Sovereignty under threat? Either Tendulkar was unaware of the meaning of the word, or he crawled when asked to bow.

Others such as Ravi Shastri, Virat Kohli, Ajinkya Rahane, Rohit Sharma, Anil Kumble, Saina Nehwal, etc, used the same hashtags to tweet in favour of the government’s stance and against the peaceful protesters.

Also in February, men such as Tendulkar and Kohli and Shastri kept off Twitter on an issue and a man they knew closely: Wasim Jaffer, the former India opener who is now a respected coach, was accused by an official of the Cricket Association of Uttarakhand of favouring Muslim players over Hindus. The manager of the team supported this official. Before that, Jaffer had resigned his position as coach, accusing officials and the secretary of the association of “pushing non-deserving players”. Tendulkar has played for Mumbai and India with Jaffer — yet he remained mum. As did Jaffer’s former India captains Rahul Dravid and Sourav Ganguly. At a press conference, Rahane said he had “no idea” about the issue. To Kumble’s eternal credit, he was one big player to support Jaffer — the minor ones who did so included Manoj Tiwary, Dodda Ganesh and Chandrakant Pandit.

Jaffer’s was a test case for his teammates — by keeping mum, they failed him and their fans.

There was no test case for Hamilton in Saudi Arabia — he did not need to speak at all for LGBTQ rights in that country. But by doing so, he has gained in stature as a man who wants equal rights for all.

He has shown that sportspersons have a duty to use their influence as a force for the general good.