In season of darkness, braving it out for world we deserve

The pandemic, the cruel lockdown, the onslaught of fake news, clampdown on democratic freedoms have exhausted us. Yet, within us all are also immense reserves for nurturance and solidarity 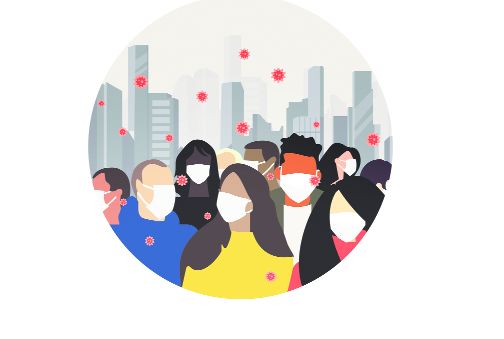 In our home, my bathroom has been occupied for the last 10 days by a cat we adopted during the lockdown and her newborn kittens. I call them kit-lets in my head, because their eyes are barely open and they don’t walk yet. The possibility of watching them grow up in our home has captured our imagination.

In another room, my husband has been in quarantine for the last one week after being exposed to a friend who was subsequently diagnosed with Covid-19. Kanta, who works in our home and keeps us well-fed while we pretend to run the rest of the world through our home office, attends weddings every weekend and it is only a matter of time before we give her the virus to take back to her extended family or she brings this unwanted gift to our home.

My brother is awaiting his RT-PCR test result. More and more colleagues at work are getting infected. There have been four deaths in my extended family and none of them have been counted as official statistics despite clear and extreme symptoms of Covid-19.

How is your life in the pandemic, dear reader?

I know the answer is hard to frame accurately in a sentence. Depending on our privilege, location, work situations and fate, we are all having a mixed bag of experiences. I’m lucky that I have this column and your attention to be able to process my feelings as I share my experiences here.

As it did for many others too, the lockdown started with abject horror and shock for me. Within two days of the Prime Minister’s pronouncement on March 24, we began to witness mass hunger in the cities as daily-wage labourers were shut out of workplaces abruptly. All eateries that served low-cost meals were closed. As a filmmaker and a member of the Karwan-e-Mohabbat — a people’s campaign against hate crimes and injustice — I found myself both documenting the unfolding humanitarian crisis as well as participating in large-scale food distribution in solidarity with those who were stranded without work, shelter and food.

In retrospect, there was a pattern to my days in the first six weeks. I would spend the day coordinating with teams who were raising funds, distributing food packets and making short films to raise awareness about the plight of India’s working poor. The news of millions of migrant labourers walking on the highways and dying of exhaustion and hunger would keep streaming in all day. I would pause at least once a day to find a quiet corner and cry. We were busy, we were angry, many of us were hurtling towards a meltdown, but we also needed to make space for grief.

It was reported in the news that India’s foodgrain stock had reached a record high of 73.85 million tonnes in April 2020. At the same time India had reached a record high of hunger and dispossession, evoking memories of the mass migration during the Partition of India in 1947. It was hard to believe that a government would turn against its people when they were most vulnerable.

In our neighbourhood, besides the distress of the poor, we began to notice the hunger and desperation of street dogs and cats that had been dependent on scraps of food from restaurants and roadside food stalls in the area. Many of us who had barely spoken to each other before began to greet each other from behind our masks as we crossed paths while walking our pets or on the way to the grocery store. Without much ado, we began to co-ordinate the feeding of animals.

At home, I found respite from the incredulity of the news by adopting two young cats who had begun to visit every day and meow for food. We named them Black and White, based on their dominant colour, but when White moved in and it seemed that we were becoming family, our children proposed that the cats deserved more formal names. Now we find ourselves looking out for the needs of a reticent Faiza and a boisterous Sahil as they make themselves at home with us.

The Covid-19 pandemic, the thoughtlessness of India’s cruel lockdown, the destruction of livelihoods, the onslaught of fake news as well as the clampdown on democratic freedoms and constitutional rights by our own government have exhausted us. Yet, within us all are also immense reserves for nurturance and solidarity. For renewal of relationships and braving it out to restore the world we demand to live in. A world we deserve to live in.