Over 94,830 animals perish every year in floods alone. The losses and impact on account of other disasters on animals are equally significant. These challenges are increasing manifold with the environmental threats faced by the planet. But, there is no mention of animals in the Disaster Management Act. 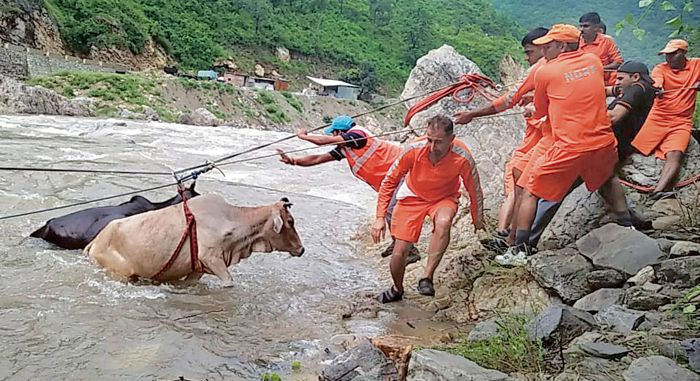 Notable: NDRF personnel are being trained in the rescue of animals during disasters. File photo 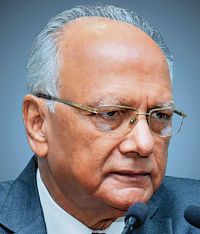 Over the last couple of decades, natural disasters in India have caused widespread destruction to life and property, including a high casualty of animals. This has a devastating impact on the rural economy and livelihood of villagers as animals have been an integral part of the daily life of about 70 per cent of the rural population. India is blessed with the largest population of cattle and buffalo in the world. It is also the largest producer of milk. For the villagers, animals are sources of economic wellbeing, food security and companionship and, more broadly, they promote the generation of wealth. Therefore, the challenging task for the future is to protect our livestock through pro-active mitigation and capacity-building measures with regional and global cooperation.

Most of the animal breeds in India are admired for their heat tolerance, inherent resistance to diseases and ability to thrive under diverse climatic conditions. However, our animal husbandry sector faces serious challenges, including the ever-increasing incidents of both natural and manmade disasters. It has been mentioned in the Flood Guidelines of the National Disaster Management Authority (NDMA) that, on an average, over 94,830 animals perish every year in floods alone. The losses and impact on account of other disasters on animals are equally significant, but are not getting reported or highlighted by the media. These challenges are increasing manifold with the environmental threats that the planet faces today.

Significantly, this issue of animal welfare finds mention in Article 48 of the Directive Principles of the Constitution and in the National Policy on Disaster Management with relevant recommendations on this issue. It has become more relevant in the wake of the declaration in the ‘Sendai Framework of Disaster Risk Reduction’ (SFDRR) which lays specific emphasis on “strengthening the protection of livelihood and productive assets, including livestock, working animals, tools and seeds.”

The vision enshrined in the national policy and SFDRR related to animal welfare calls for legislative support for effective implementation. However, in the Disaster Management Act, 2005, there is no specific mention of animals. The Secretary, Animal Husbandry Department, is not a member of the National Executive Committee in the Act. This gap needs to be addressed by including the appropriate provision related to the management of animals during disasters in the Act.

The inclusion of these issues in the DM Act will provide legal and institutional support for investments in various risk-reduction measures in this field. Our experience in the handling of cyclones on the east coast illustrates the effectiveness of investment in risk-reduction and mitigation measures.

Under the Act, the National Cyclone Risk Mitigation Project (NCRMP) was launched in the coastal states of Odisha and Andhra Pradesh in 2011. The impact of the investments made in the risk-mitigation initiatives under this project was that while in the 1999 super-cyclone of Odisha, over 10,000 human lives were lost, in the two very severe cyclones in the region in 2013 (cyclone Phailin) and 2014 (cyclone Hudhud), the casualties of human lives were only 21 and 17, respectively. A similar risk-reduction initiative with legal and institutional backing is needed for the management of animals in emergencies.

In the last few years, the NDMA has taken some risk-reduction initiatives following discussions with the World Society of Protection of Animals. They include the establishment of Veterinary Emergency Response Units (VERUs), training of NDRF personnel in the rescue of animals during disasters, developing a training module for the NIDM and effective management of animals during emergencies.

The VERUs, established in veterinary universities, act as regional training centres, with the primary task of imparting training on animal-specific issues related to disaster management for the veterinary students, para-vets, farmers and other stakeholders. Only six VERUs have been set up so far at Patna, Guwahati, Chennai, Anand, Jabalpur and Palampur. The programme must be extended to all states.

Around 300 NDRF personnel have undergone Training of Trainers (ToT) programmes at the VERUs by the Policy Perspectives Foundation (PPF) in association with the World Animal Protection and state administrations. As a result, the NDRF has rescued 14,178 animals till mid-2021. The training of responders should be an ongoing process, with the SDRF personnel also being trained in animal rescue operations. The National Institute of Disaster Management (NIDM) should organise capacity-building and awareness-generation programmes for all stakeholders in association with the State Disaster Management Authorities, training institutions, VERUs and other veterinary institutions. For its success, including the Panchayati Raj institutions would help.

Regarding the inclusion of animals in the legislative framework, it may be noted that most countries, including the USA, had no legislation on this issue until a couple of decades ago. Following high casualties of animals in Hurricane Katrina of 2005, major changes were made to federal and state emergency laws in the USA to include provisions for the evacuation, rescue, recovery, shelter and tracking of animals and pets during disasters. Similar provisions in our legislative framework have become all the more relevant in the wake of the July 2018 verdict of the Uttarakhand High Court. It mentions that in Uttarakhand, animals should be treated as ‘legal entities’, and not as ‘property’. It echoes the famous statement of Mahatma Gandhi: “The greatness of a nation and its moral progress can be judged by the way in which its animals are treated.”

Since issues related to the management of animals during disasters translate directly into the livelihood protection of rural families, poverty reduction and food security, it may be relevant to initiate a well-chalked-out strategy to ensure that these issues get the appropriate and rightful attention in the disaster management framework. With this aim, the Policy Perspectives Foundation and Sphere India are organising a national-level workshop under the aegis of the Ministry of Animal Husbandry, NDMA and Veterinary Council of India in New Delhi on June 22.

The recommendations of this workshop will hopefully pave the way to drawing a roadmap for appropriate amendments in the DM Act to include animal care and protection into national, state and district disaster management plans and an action plan for capacity-building of all stakeholders in this field.