Mob attacks kept Punjab in the grip of terror

Independence was around the corner, but the public mood in Punjab was far from celebratory. The primary concern of millions of residents was to save their lives and property. Mobs ran riot across the province, killing or scaring away people and grabbing their land and houses. The desperate efforts made by the police and the administration largely went in vain as the situation quickly spun out of control. Amritsar district was among the worst affected. 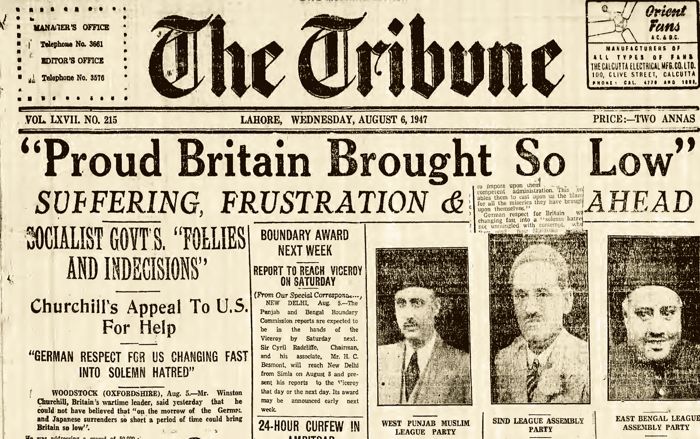 Ordeal: Britain was facing an economic crisis as it prepared to leave India. (August 6, 1947)

AMRITSAR, AUG 5: Two persons were injured in a bomb explosion in Dhab Khatikan today. One shop was looted in Hathi Gate and four persons were arrested. In the city itself, two bombs were thrown in Chowk Telian. One exploded, but caused no damage.

One body was found this morning on the Hide Market Road. One person was shot dead in village Chuburji. Two persons were killed in police firing and one injured in Kucha Khaiwala and Moti Mohalla. The District Magistrate has imposed 24-hour curfew till 5 a.m. in the walled city of Amritsar.

Five persons were fatally stabbed in different villages in Majitha area. Seven persons are reported to have received injuries as a result of bomb explosions and stabbing in Tarn Taran. Two of the injured persons later died in the hospital. There were four cases of arson. The District Magistrate has re-imposed curfew in Tarn Taran with effect from 7 a.m. today.

Latest reports describe village Kot Said Mahmud and Majitha area as disturbed. Police and military reinforcements have been rushed to these places.

Armed attack on village in Moga

Ferozepore: Nineteen persons are reported to have been killed and nine seriously wounded as a result of an armed attack made on Friday night on residents of the village of Kokri Arayan in Moga tehsil.

The assailants, who were armed with guns and other deadly weapons, opened fire a number of times. On receiving information, an armed police party was immediately rushed to the village.

No arrests have been made so far. A large number of troops have been sent there, who will also patrol the surrounding villages.

Ludhiana: Thirteen persons were killed and nine injured in village Charala, 15 miles from Ludhiana, as a result of an attack by an armed mob at midnight on Sunday last.

Soon after the receipt of information, Mr Ram Nath Luthra, District Magistrate and Mr Amin Chand, Superintendent of Police, reached the spot and took prompt measures to bring the situation under control. The situation is now well in hand.

WOODSTOCK: Mr. Winston Churchill, Britain’s wartime leader, said yesterday that he could not have believed that “on the morrow of the German and Japanese surrenders so short a period of time could bring Britain so low”. He was addressing a crowd of 50,000 people in the grounds of his birthplace, Blenheim Palace, near here, on the eve of Parliament’s two-day debate on the state of the nation and the British Government’s expected proposals for tackling Britain’s economic crisis.

It was his first major political speech since last May when he had to retire temporarily from political activity because of an operation. Yesterday’s crowd was attending a great Conservative garden party.

“Cabinet Ministers tell us every weekend how bad our position is and that the twelfth hour will strike before the end of the year,” he said. “The main facts are obvious to every thinking man or woman. Under the capitalist system’s free enterprise, we bred in Great Britain nearly 40,000,000 people, half of whose food came from beyond the seas but whose progress was constant and whose standard of living before the war was already the highest in Europe. Since then, two disasters have come upon us: The Second World War and the first Socialist Government with a majority. By supreme exertions, we surmounted the first disaster. The question which glares upon us today is: How shall we free ourselves from the second?”

While Britain has “blithely cast away mighty India and Burma,” the Socialist Government has “clung to tiny Little Palestine,” he added.

LAHORE: Mr Iftikhar Hussain Khan of Mamdot was unanimously elected leader of the West Punjab Muslim League Assembly Party at its meeting held at the Assembly building at

4 p.m. today. Ch. Khaliq-uz-Zaman, who had been nominated by the League High Command, presided over the meeting. Fifty-two members were present out of 57 and they included Mr Firoze Khan Noon who, though a hot contestant, withdrew this morning. Hussain Khan’s election ensures his appointment as Premier of West Punjab. In a statement issued three hours before the meeting, Firoze Khan Noon said: “Pakistan being faced with difficult problems, her national interests demand unity in our ranks and a spirit of sacrifice. I have, therefore, decided not to allow my name to be proposed at today’s meeting.”

NEW DELHI: The Punjab and Bengal Boundary Commission reports are expected to be in the hands of the Viceroy by Saturday next. Sir Cyril Radcliffe, Chairman, and his associate, Mr H.C. Besmont, will reach New Delhi from Simla on August 8 and present the reports to the Viceroy that day or the next day. The boundary award may be announced early next week.