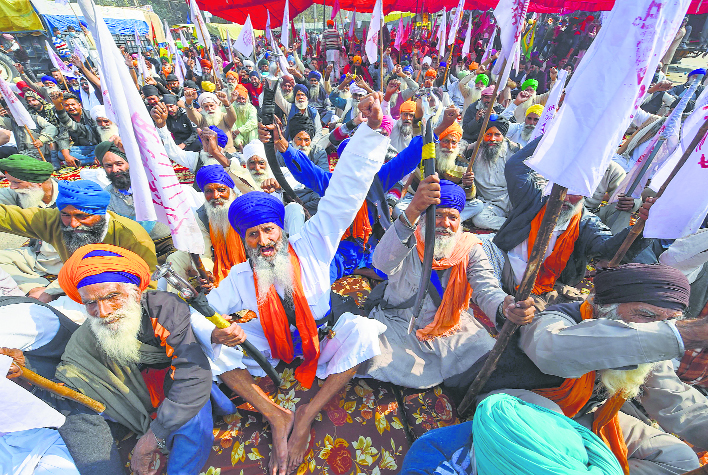 Rising concern: Price assurance matters for the farmers but things have moved beyond that. PTI

There is a well-known rustic north Indian story of ‘99 pyaj aur 100 joote’. Ninety-nine onions or a hundred shoes! A man was asked to choose between two forms of punishment for his misdeed: Sau pyaj khao ya sau joote khao (Either eat a hundred onions or get a hundred shoe lashes). He chose to eat onions but could not go beyond 99, and thus ended up with a hundred shoe strikes as well.

Just as the Manmohan Singh govt failed to read the nature of the Anna movement and the depth of its popular support, the Modi govt is also a victim of false images around the farmers’ movement, often created by its spin doctors. The UPA regime had at least the media to show it the mirror; the current govt has denied itself this feedback.

This is exactly what happened to the UPA-2 government while handling the Anna Hazare movement. It first chose the path of indifference and repression but could not carry it beyond a point. That was followed by its humiliating capitulation. The government ended up with the worst of both worlds: it looked weak and immoral.

Something similar is happening to the Narendra Modi government. For once, PM Modi’s sharp political acumen has gone missing over the last ten days. The government began with imperious arrogance. It did not feel the need to consult farmers’ organisations, not even those within its own fold, before announcing sweeping changes in the legal architecture of Indian agriculture. It brushed aside desperate pleas for stakeholder consultation before the ordinances were converted into laws, short-circuiting all parliamentary procedures. It turned a blind eye to all the warning signs: big and small protests all over the country on August 9, September 24 and November 5. And it just stood and watched the unprecedented farmers’ mobilisation in Punjab. Finally, short of shooting at the farmers, it tried everything to foil the farmers’ march to Delhi: barricades, boulders, digging up roads, water cannons, and tear gas. It did not work.

Even after the farmers camped on Delhi’s borders, the government’s response was to place conditions for talks. That did not work. It tried the usual tricks in the unconditional talks that followed: divide, distract and divert. Farmer leaders did not fall for these. No wonder, the second round of talks also remained ‘inconclusive’. The government’s intransigent behaviour has meant that so far, these talks have seen little meaningful talk. The government insists that it will discuss anything except the repealing of the three farm laws. The farmers are determined that they cannot discuss anything else, they shall not settle for anything less.

Just as the Manmohan Singh government failed to read the nature of the Anna movement and the depth of its popular support, the Modi government is also a victim of false images around the farmers’ movement, often created by its own spin doctors. The UPA regime had at least the media to show it the mirror; the current government has denied itself this crucial feedback. The government will continue to blunder as long as it does not face up to some basics about this historic protest by the farmers.

First, it is not just Punjab. No doubt, Punjab farmers have been at the vanguard of this struggle and the other regions were slow to catch up. But the dramatic events of November 26 have catapulted this agitation in the national imagination. There is significant mobilisation from Haryana and Uttar Pradesh. And now that Rajasthan is free of its panchayat elections, one should expect mobilisation from that end as well. Covid restrictions prevent farmers from other parts of India to come in big hordes, but I have noticed farmer leaders from all over the country flocking to the protest sites. The protest enjoys the support of practically every noticeable farmers’ organisation. So much so that the RSS-backed Bharatiya Kisan Sangh has been forced to extend moral support to the movement. This is now a national movement.

Second, this is not a movement of ‘middlemen’ carried out by Opposition parties and covertly supported by the ‘Khalistanis’. This is a farmers’ movement. Farmers all over the country may or may not join this movement. They may not be fully aware of what it is about. Yet they now share a sense that the Modi government is doing something big and something bad to the farmers. Reports from neighbouring states hint at popular upsurge not very different from the Anna movement: panchayats in Haryana are passing a resolution, asking one member from each household to join the movement, villagers are offering food to the agitators, roadside dhabas are offering free meals, and some petrol pumps even offered free diesel.

Third, this is not just about the MSP (minimum support price). Sure, a price assurance matters to the farmers and could have gone a long way in allaying their anxieties. But things have moved beyond that. The government’s reported offer of giving assurance to maintain the current level of procurement at MSP is unlikely to cut ice now. Every farmer organisation in this movement is wedded to the idea of repealing the three farm Acts. They will simply not settle for anything else. Actually, it is not even about these three laws. As in the case of the Lokpal movement that became a site for all that was wrong with the country, the farmers’ movement has become an occasion to express the anguish of farmers at the way they have been treated for several decades.

We stand at a critical juncture. PM Modi needs to take a deep breath, ask his flunkies and megaphones to shut up, and say this to the farmers: I know you have some genuine apprehensions about these three laws. It is my responsibility to address your concerns. Therefore, I am taking these back.

Will he have the courage to do so? Or will he give in to the temptation that most authoritarian leaders fall for, namely, go for full-throttled repression? Or, something more sinister and diabolic?