Even though there are several issues that should form the poll narrative in Bihar, the BJP has managed to blindside everyone with the Sushant Singh Rajput case. The biggest loser here is Nitish Kumar. He is not setting the terms for this election. The BJP has snatched away his calling card in the last polls, the Bihari sub-nationalism. It has erased his hallmark social justice plank by forcing him to bat for Sushant. It has even set the Paswans up against him. 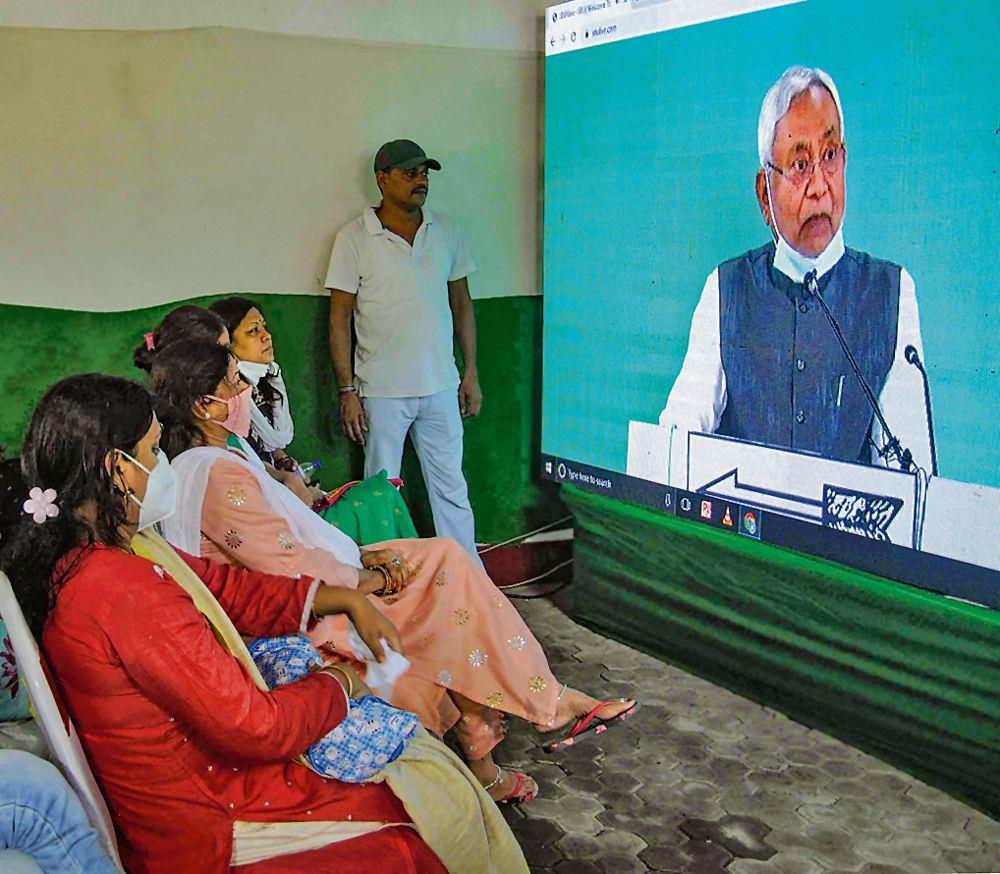 Virtual presence: The NDA may win, but will Nitish Kumar be the CM again?

It defies political logic that in a state as ravaged as Bihar is by the Covid pandemic, floods, unemployment and a colossal migrant crisis, Bollywood actor Sushant Singh Rajput’s death is fast emerging as the dominant campaign theme for the upcoming Assembly elections.

It is also bewildering that someone from a forward caste, which is minuscule in numbers, is being projected as a symbol of Bihari pride in a Mandalised state with a long history of social justice movement. In fact, #JusticeForSushant is the new rallying cry for sub-nationalist emotions and every political party, socialist, Mandalite or otherwise, has perforce joined the chorus.

Not just joined, they’re vying with each other to own the late actor. Chief Minister Nitish Kumar’s first sound byte after emerging from 84 days of lockdown in his official residence was to cheer the Supreme Court’s decision to transfer the SSR case to the CBI. Coming from a man who has crafted his entire politics around the have-nots, often at the cost of the upper castes, his comment was seen by many as a sell-out to the BJP.

Then there’s the Dalit dynast Chirag Paswan of Ram Vilas Paswan’s LJP. He claims he telephoned Maharashtra Chief Minister Uddhav Thackeray not once, but twice, to demand a quick and fair probe into Rajput’s death. And let’s not forget that Extremely Backward Caste (EBC) leader Jitan Ram Manjhi whose Hindustani Awam Morcha (HAM) recently joined the BJP-led NDA. He wants a Padma award for Rajput.

The Opposition has proved as vocal. Tejashwi Yadav, son and heir of Lalu Prasad Yadav, who is fondly remembered even today by sections of the backward castes in Bihar as the great enabler of social mobility and equality, never fails to reiterate that he was the first to meet Rajput’s family and demand a CBI probe.

If the BJP is smirking, it has reason to do so. In one fell swoop, it has turned Bihar politics on its head. For years, it was a marginal force in a landscape dominated by the Mandal parties. It had no choice but to play second fiddle to a troublesome and demanding ally like Nitish Kumar just to keep a toehold in the state.

But by weaponising Rajput’s death with the help of pliant TV channels and its own mastery over social media platforms, the BJP has altered the texture of the Bihar campaign. The usual tropes of an election in Bihar — caste, reservations, secularism, etc — are missing, washed away in a deluge of emotions whipped up by slogans like na bhule hain, na bhulne denge (we have not forgotten, nor will we let them forget). For the first time, the BJP has taken control of the narrative and all other parties are merely reacting.

It’s not surprising. The SSR case has all the elements of a gripping soap opera: a handsome, talented local lad who was poised to make it big in tinsel town till his life was tragically cut short, an attractive young girlfriend set to be burnt at the stake as a witch after a frenzied media trial, drugs, booze parties, money and lots of glamour.

This is great stuff for a B-grade Bollywood movie and for the vultures in television studios that prey on human frailties in the hunt for TRPs. Few could have imagined that it can also be turned into political fodder and the next Bihar election would be fought with a tragic death as a prop and a lynch mob as campaigners.

According to a survey by the Centre for Monitoring Indian Economy (CMIE), the unemployment rate in Bihar has crossed 40 per cent. Chief Minister Nitish Kumar boasted in his first virtual poll rally that he is creating 10 lakh jobs a day. The people made no bones what they thought of his claim. His speech got three times more dislikes than likes, found a Bihar-based website called firstbihar.com.

More than 8 million people across 16 districts in the state have been hit by floods. There’s little relief forthcoming from a somnolent administration even as waters continue to rise in some areas.

Bihar is eighth on the list of top-10 states with a maximum load of Covid cases. It has recorded more than 1.5 lakh positive cases but experts doubt that this is an accurate reflection of the situation on the ground. The state simply doesn’t have enough testing centres and according to Central Government figures, Bihar’s testing rate per million population is the lowest in the country. The actual caseload is probably several times higher.

Anecdotal reports from the state suggest that the pandemic is rampaging through the countryside and the district administrations seem to have thrown up their hands because of lack of medical facilities to contain and treat the virus.

But the biggest humanitarian disaster in Bihar is the migrant crisis and the inept handling by the Nitish Kumar government. As the Chief Minister turned his back on his own people and virtually refused to help repatriate them, tragedy played out on highways and along the railway tracks. Thousands of labourers were forced to trudge back to their villages in Bihar on foot, clutching their children and their meagre possessions in their arms, going without food for days on end because they had no money. Many died. We have no count. Many fell sick. We have no count of that either.

These are just some of the issues that should form the poll narrative in Bihar. But the BJP has managed to blindside everyone with the Sushant Singh Rajput case.

The biggest loser in this is Nitish Kumar. He is not setting the terms for this election, the BJP is. It has snatched away his calling card in the last polls, Bihari sub-nationalism. It has erased his hallmark social justice plank by forcing him to bat for Rajput. It has even set the Paswans up against him. The NDA may win, as early opinion polls suggest. But will a diminished Nitish Kumar be the Chief Minister again?