November 10 may have some surprise in store. Ground-level political activists believe a 2019 Maharashtra-like verdict may happen where the BJP, in spite of emerging as the number one party, struggles to form a government due to its ally JD(U)’s inability to excel. In other words, politics in Bihar will begin after the verdict. 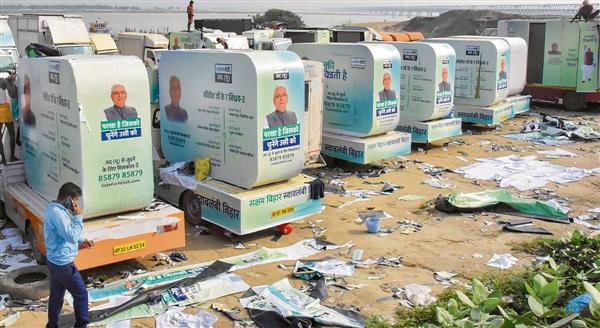 Lying low: There is unanimity on the role of Nitish Kumar in the state’s development but support for him appears to be ambivalent.

The Bihar Assembly polls are less than a fortnight away, but a full-scale campaign is not in sight, perhaps due to Covid-19. However, it has not prevented political pundits, pollsters and TV news surveys from predicting a victory for the ruling JD(U)-BJP alliance. The latest Times Now-C-Voter opinion poll has predicted that Chief Minister Nitish Kumar will return to power, with the BJP bagging 84 seats and ally JD(U) 70. The survey forecasts the Congress managing to get 15 seats, with the RJD winning 56 seats.

November 10 may however, have some surprise in store. Ground-level political activists believe a 2019 Maharashtra-like verdict may be in store where the BJP, in spite of becoming the number one party, struggles to form a government due to its ally JD(U)’s inability to excel. In other words, politics will begin in Bihar after the November 10 verdict.

There are some pointers in that direction. The BJP’s warmth towards the Lok Janshakti Party leader Chirag Paswan is rather disproportionate to the LJP’s ability to match CM Nitish Kumar. Chirag is seen as the youth face, capable of scoring and exploiting the anti-incumbency factor against Nitish. In the BJP’s scheme of things, JD(U)’s loss of 25-plus seats can be compensated by the LJP if it nets seats in double digits. This is a tricky, adventurous and ambitious project on several counts.

In the Times Now-C-Voter survey, only 29 per cent of the voters view Nitish Kumar’s performance as good, while 55 per cent of the respondents say they want a change in government in Bihar. The LJP is expected to win only five seats, if one goes by this opinion poll.

While a sympathy vote for the late Ram Vilas Paswan’s LJP may or may not happen, the party is not the sole representative of Dalit aspirations, as over the years, the party’s core vote bank has been restricted to Paswan votes rather than various sub-castes of the socially weaker sections. Chirag’s stand on Hathras has remained ambivalent, nor has the new LJP chief forcefully articulated Bihar farmers’ difficulty in getting the lucrative minimum support price. There has been no explanation from his side, even while attacking foe Nitish Kumar, what he or his father (as Union minister) did when millions of migrant labourers were made to walk over 1,000 kilometres. For die-hard Biharis, Chirag’s rather elitist outlook and inability to converse in a Bihari dialect limits him as an effective campaigner.

Ram Vilas Paswan or the LJP’s appeal to Muslim voters — spread rather evenly across the state — had diminished further following the anti-CAA stir. In fact, the anti-CAA stir and this insecurity are such that the Muslim voters, in all likelihood, would gravitate towards the RJD-Congress-Left alliance or Mahagathbandhan than opt for the Asaduddin Owaisi-led RLSP-BSP alliance. There could be few exceptions, but largely due to the local candidate’s strength, coupled with a sharp division of votes.

The Opposition house is far from cohesive. It should be remembered that any campaign against an incumbent government, that too in power for 15 years, needs to usher in hope. A positive campaign with solutions to specific issues of farmers, weaker sections and the youth has far more potential to be effective than rattling off statistics about the alleged wrongdoings of the Nitish regime. It is baffling that the Mahagathbandhan leaders have not unleashed firebrand orator Kanhaiya Kumar to counter Chirag and others.

Though drastically different from Lalu Prasad Yadav, Kanhaiya has a knack for calling a spade a spade in the most effective manner. A glimpse of his eloquence was on display in Begusarai recently when he spoke spontaneously at the filing of nomination by a CPI candidate. Kanhaiya said that earlier, the EVMs were hacked but now the BJP has ‘hacked’ Chief Minister Nitish Kumar. His address lasted less than five minutes, but was laced with several digs. The former JNU students’ union president said if he continues to be described as a traitor, he will join the BJP (as if to cleanse his alleged wrongs). Spoken in chaste Hindi, spiked with wit, the impact was instant.

The question that is doing the rounds in the Congress and RJD circles is why Chirag is allowed to occupy so much of TV news and debate space. Assuming that it is a bit deliberate and aimed at building a narrative of sorts, why can’t Tejashwi and the Congress leaders be more media- savvy to counter him? The Congress list of star campaigners, for instance, includes Shatrughan Sinha, Madan Mohan Jha, Sadanand Singh, Captain Amarinder Singh, Nikhil Kumar and Sachin Pilot. Informed sources said leaders like Sachin Pilot have been told to wait till October 20 before visiting Bihar.

Perhaps the Mahagathbandhan leadership is counting on the ‘sagacity’ of Bihari voters and doing the minimum such as a unity between Tejashwi and Tej Pratap as an effective measure. Some of the Mahagathbandhan leaders are looking at the findings of a new poll agency, Prashnam, with a great deal of interest and optimism. Rajesh Jain’s Prashnam has given Tejashwi the edge over Nitish but admitted that overall, the NDA is ahead. One of its findings is that when asked to choose head-to-head, 39 per cent of its respondents chose Tejashwi Yadav, while 36 per cent opted for Nitish. A significant number, 25 per cent i.e. one in every four voters, remained undecided. Both C-Voter and Prashnam say Nitish Kumar is not crossing 40 per cent of the support mark, while the second important finding is that many voters have not decided yet.

It is often said that the BJP of today is increasingly becoming the Congress of the past when the grand old party was a major political force in the country. The BJP, therefore, cannot be faulted for nursing an ambition or working towards its atmanirbharta (ability to win on its own). In the past two years, the party has lost four allies, including two of the oldest — Shiv Sena and the Akali Dal — besides the Telugu Desam Party and the All-Jharkhand Students’ Union. These exits were bitter. Would Nitish Kumar’s JD(U) be the fifth?