Immortal for a Moment

As a parent of teenagers now, I think of the adolescents my brothers and I were as we tried to cope with my near-death experience three decades ago 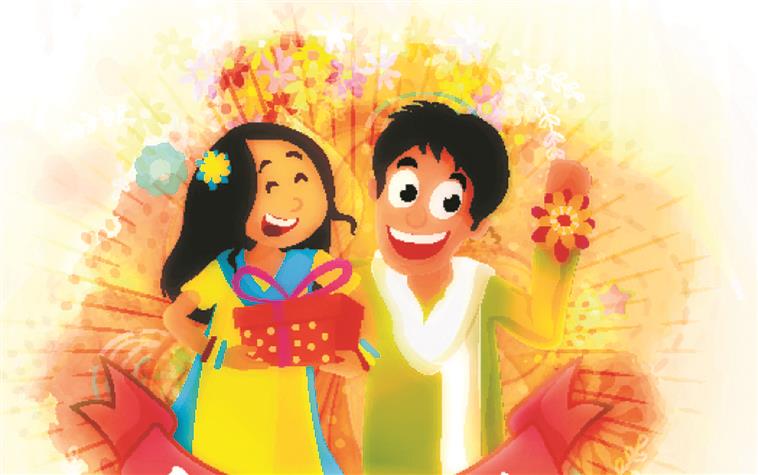 IN my early teens, I had a near-death experience that transformed my life. It was a winter morning in Delhi and a series of mishaps led to a scene where I found myself in a hospital bed recovering from emergency surgery to control internal bleeding, and with multiple fractures on my right arm. My older brother was 15 years old and Manu, my younger brother, was 10.

It is Rakshabandhan tomorrow — a day to celebrate our bonds with siblings — and scenes of growing up with my brothers are coming back to me. When I look back at that year when my injuries and the uncertainty of multiple surgeries overwhelmed our family, I am now able to see the three siblings as the children we were at that time. As a parent of teenagers now, I think of the adolescents my brothers and I were as we tried to cope more than three decades ago.

Bhaiya used to stay quiet when he came to see me in the hospital. He was asked to hold my right hand, which had lost sensation and movement, and exercise my fingers to keep them from wasting away. He would do it awkwardly without looking at my face. It would give me the chance to look at his face. I wanted to tell him that I really couldn’t feel a thing as he exercised my fingers. He would say a quick bye when it was time to leave and turn away.

Manu, the youngest amongst us, seemed oblivious to the crisis. He came in one day and sat on my hospital bed with a big bounce. I was still quite fragile and screamed in pain. The boy was chided and led out of the room. After that, he would spend most of his time during visitation hour playing on the swings in the play area. I used to miss seeing him.

A few months later, after I returned home, I was required to go to hospital for daily physiotherapy to make my right arm functional again. When schools shut down for summer vacation and our cousins came to stay with us, my parents would often send us to hospital on our own. A bunch of teenagers, we learnt to navigate the city together, changing DTC buses and often experimenting with alternate routes. Like children do, we turned the painful physiotherapy sessions into an adventure. A celebration of growing up together and discovering our own autonomy.

A decade later, my mother and I went to visit Bhai in New York, where he was working as a doctor in Queens. As we took off on a road trip to Pennsylvania and later to Niagara Falls, we bonded as siblings all over again — reading maps, choosing scenic routes and often getting lost. It didn’t matter because we were connecting with each other after years of being distant. We were being mad and childish in the safety of each other’s company again.

Another two decades later, we met in Shanghai. Bhai had been invited to a medical conference to make a presentation as an electrophysiologist. He was newly divorced. Our mother, Manu and I decided to book ourselves in the same hotel as him in this time of personal crisis for Bhai. We seized the moment to travel new routes again, experiment with food and show our mother how smoothly we could transform into bickering teenagers, even though we were safely middle-aged by now. It was a short cut to healing. To letting each other know that we are a team. We are there for each other.

Bhai called me recently and shared that my accident as a teenager came up in his therapy session. “It made me afraid of losing someone close to me and I coped by clamping up,” he shared. “I want to loosen up and release that fear.”

I spoke to him about that year and what I think it did to us as a family. “Why don’t I remember anything?” he said.

“I guess I dealt with it by remembering every detail and you went numb. But we can exchange notes now and let go,” I said.

I texted Manu about this conversation. “I wasn’t afraid of dying. The worst thought that used to cross my mind when I was in pain was that Manu will forget me if I die,” I shared with him.

“I would have remembered you always,” he texted back. And there it was in front of me – the best Rakshabandhan gift I could ever hope to get.

The pandemic may prevent us from meeting our siblings this year, but I wish you, dear reader, a festival of deep connections with everyone whose love heals you.

— The writer is an author and film-maker natasha.badhwar@gmail.com