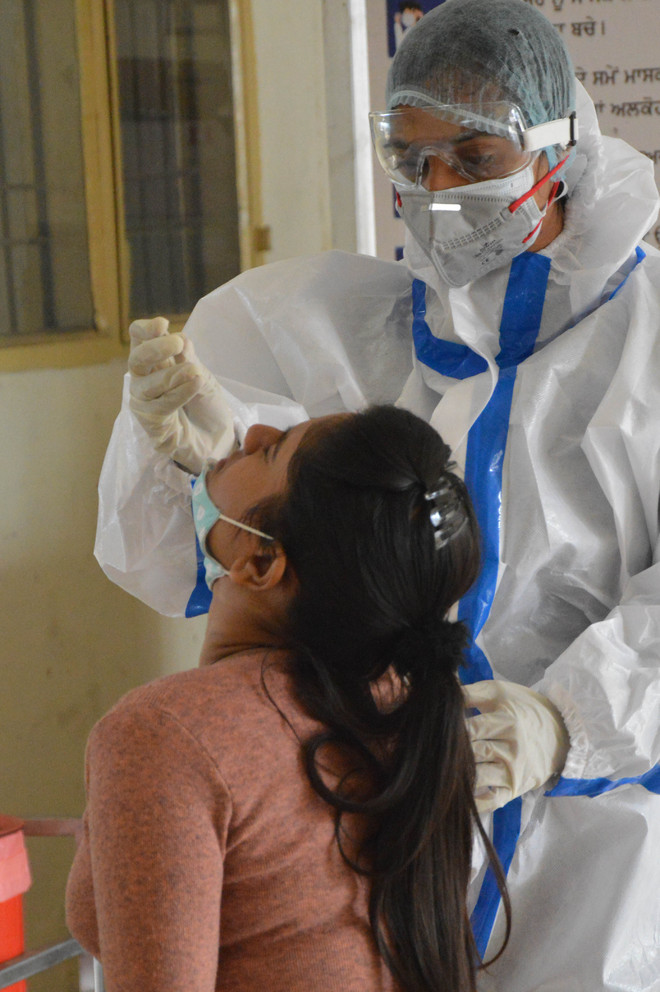 A woman gives her sample for the Covid-19 test in Ludhiana.

As many as 25 fresh cases of Covid-19 have been reported from various parts of the district. Of them, eight persons came in contact with positive patients, five visited the OPD and nine patients with influenza like illness visited the Flu Corner. Besides, three others, including a healthcare worker, tested positive for the virus.

Deputy Commissioner Varinder Kumar Sharma said at present, there were 283 active patients in the district.

He said a total of 32 patients, including 25 new patients from Ludhiana district and seven from other states/districts, had tested positive in the past 24 hours.

Sharma said now, the total number of patients related to Ludhiana was 24,941 while 3,734 patients belong to other districts/states. As per information, 23,684 (94.96 per cent) patients from Ludhiana district had recovered so far.

He said unfortunately, one patient from Jammu lost his life today. Now, the total number of persons who lost their lives include 969 persons from Ludhiana and 453 from other districts.

He said 2,468 samples of suspected patients were sent for the testing today and their results were expected shortly. He appealed to residents to adhere to all safety protocols such as wearing masks, maintaining social distancing and washing hands frequently of the state government to not only save themselves but keeping everyone around safe.