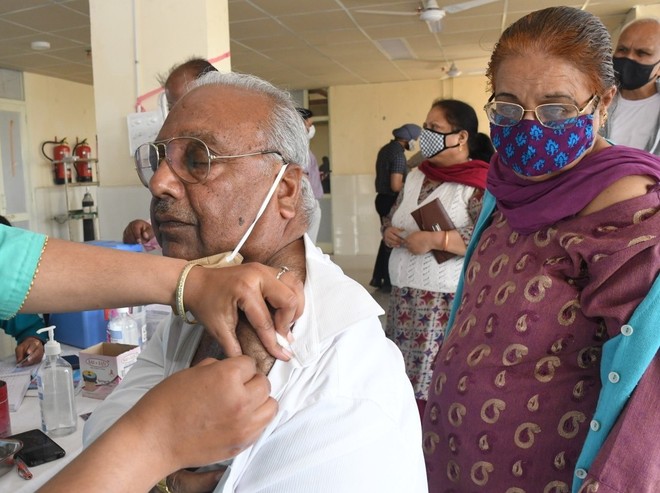 An elderly person takes the vaccine in Mohali on Tuesday. Photo: Vicky

About 397 persons — 344 senior citizens and 53 persons aged 45 to 59 with comorbidities — were administered Covid vaccine at seven government hospitals and 29 private hospitals of the district today.

Dayalan said Major KS Dhillon (Retd), an octogenarian, came forward voluntarily for inoculation at Fortis Hospital and received the jab. He also appreciated Dhillon’s gesture via a tweet. He said Dhillon was in good health and encouraging others to get vaccinated.

Major Dhillon had fought a war against Pakistan in 1965. He had then led a detachment of tanks and was badly wounded in the combat. He has braved stage 4 cancer, non-Hodgkin lymphoma.

The DC said 5,633 healthcare workers and 3,816 frontline workers have been vaccinated against Covid-19 in the district. He said there was no need to hesitate from getting jabbed.

Meanwhile, senior citizens have started approaching the Civil Hospital, Kharar, for vaccination. Manohar Singh, Senior Medical Officer, Kharar, said 10 citizens came to the hospital after getting themselves registered online and they were given shots of Covashield. They were kept under observation for an hour in the hospital.