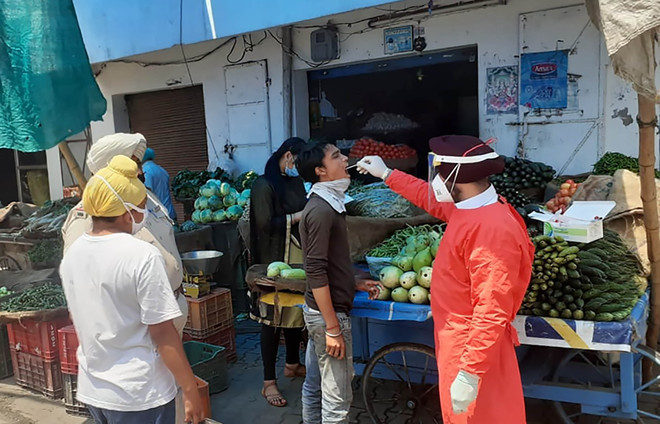 An official of Health Dept collects samples in a Kapurthala market.

With 101 fresh Covid positive cases reported today, the district tally has increased to 61,793. Of these, 25 cases are from other districts. As many as five persons succumbed to the deadly virus today, taking the toll to 1,435.

A total of 59,052 persons have recovered from the disease in the district so far, while the number of active cases in Jalandhar is 1,306.

The district reported three more Covid fatalities on Friday, taking the death toll to 940, while 74 new cases pushed the infection tally in the district to 29,750.

Health department officials said report of 2,925 samples was received and of them, 70 fresh cases were from the district, while four patients were reported from other districts. The number of active cases in the district now is 765, while 28,045 patients have recovered so far. The persons who succumbed today have been identified as a 56-year-old woman of Alampur village, a 83-year-old woman of Mahal Kurd village, and a 51-year-old woman of Hukran.

Nawanshahr district reported 12 Covid cases on Friday, with which the district tally has gone up to 11,262. No death was reported from the district today. The district now has 188 active cases, of which 154 are under home isolation.

The number of recovered cases is 10,736 (95.32 per cent). Urban Rahon, Sujjon and Saroya blocks did not report any case. As many as 24 patients are admitted to L-II and seven in L-III Covid care facilities in local hospitals. 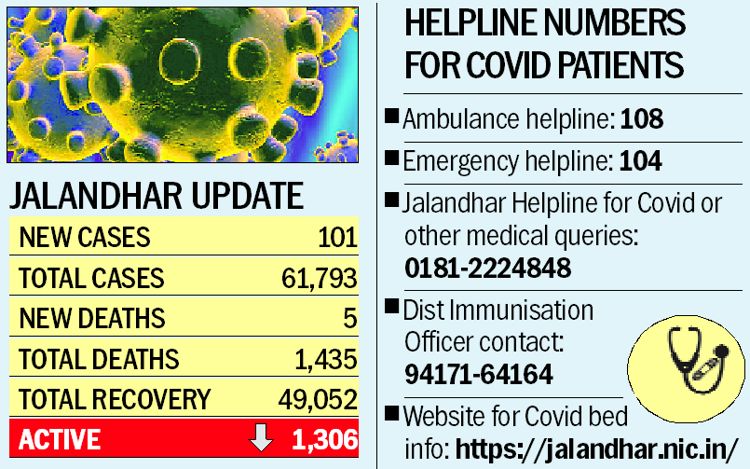