Rumour-mongers discouraging people from tests to be brought to book: CP 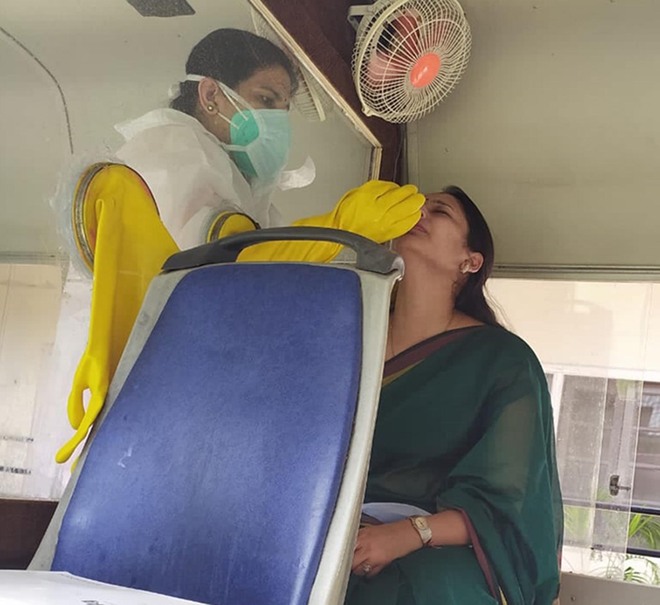 A health official collects a nasal swab of MC Commissioner Komal Mittal in a mobile van in Amritsar on Friday.

The district reported 179 new cases and five deaths on Friday, taking the case count to 4,404 and toll to 240. Considering the widespread reporting of cases from rural and urban localities, the community spread of the virus is written on the wall, but the authorities have shifted to imposing restrictions in limited areas to avoid further damages to the economy.

The deceased have been identified as Manjeet Kaur (76) of Kotli village, Jasmeet Kaur (55) of Gali Arian Wali, Jaggi Lal (54) of Ranjit Avenue Block C, Ram Lubhaya (60) of Krishna Nagar in the Joura Fatak area and Sukhdevraj (52) of Gali Wadda Haripura.

Meanwhile, sending a warning to rumour-mongers for issuing misleading statements and circulating videos pertaining to Covid-19 testing on the social media, Commissioner of Police (CP) Sukhchain Singh Gill on Friday stated that various police teams had been constituted to keep a tab on such activities. “The teams will check contents on websites being operated in the district and also on the social media and those spreading misinformation regarding Covid would be brought to book,” said the CP.

He said the government was putting in all-out efforts to prevent the spread of the virus, but the activities of some persons of circulating unverified reports were discouraging people to shun testing or seek hospital care. “Such unsubstantiated reports could even lead to the death of Covid patients as they may avoid visiting treatment out of fear being spread by rumour-mongers,” he said.