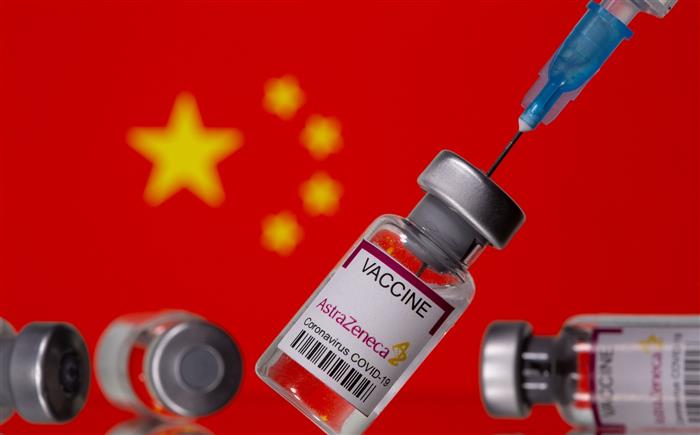 AstraZeneca's COVID-19 vaccine carries a small extra risk of rare blood clots with low platelets after the first dose and no extra risk after the second, a study led and funded by the drugmaker showed on Wednesday, after worries over side-effects.

The study, published in the Lancet medical journal, found that the estimated rate of thrombosis with thrombocytopenia syndrome (TTS) after the first dose was 8.1 per million in those inoculated, AstraZeneca said.

After the second dose of the vaccine, branded Vaxzevria and invented by Oxford University, the rate was 2.3 per million, comparable to that seen in unvaccinated people, the Anglo-Swedish company added.

AstraZeneca's shot has faced several setbacks, including production delays, and rare cases of severe side-effects, including TTS, which led to several countries restricting or stopping use of the vaccine, probes by regulators and warning labels.

The European Union's (EU) drugs regulator has been looking into cases of TTS since March and has found a possible link to Vaxzevria, and to Johnson & Johnson's single-dose Covid-19 shot. It has, however, maintained that overall benefits of both vaccines outweigh any risks posed by them.

Wednesday's findings evaluated cases reported as of April 30 that occurred within 14 days of receiving the first or second dose, using AstraZeneca's global safety database, it said.

Public focus has been high on the vaccine as it had been hailed as potentially the world's best weapon against the pandemic because it is cheap and easily transportable.

The study said limitations of the analysis included reliance on data provided by healthcare providers and those who got vaccinated, which might lead to under-reporting of cases.

It added that "heightened media attention might have led to event misclassification."

As of the cut-off date, 13 cases of TTS had been identified globally after the second dose in people aged 45 years to 85 years, including eight women. Some 399 cases were reported after the first, the study showed, while data used for the number of doses administered was limited to the EU, European Economic Area, and Britain.

"Unless TTS was identified after the first dose, these results support the administration of the two-dose schedule of Vaxzevria, as indicated, to help provide protection against Covid-19 including against rising variants of concern," AstraZeneca senior executive Mene Pangalos said in a statement.

The EU drug regulator in May advised against a second AstraZeneca shot for people reporting TTS after the first. Reuters

Pakistan is 'arsonist' disguising itself as 'fire-fighter': India's strong Right of Reply at UNGA