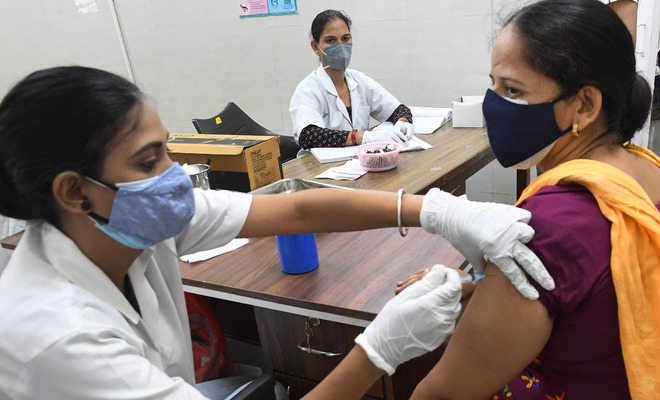 A woman being inoculated in Chandigarh on Wednesday. tribune photo: Manoj Mahajan

The highly transmissible Delta variant or B.1.617.2 has spread its tentacles in Chandigarh and Punjab, according to genomic characterisation study conducted by scientists from the National Centre for Disease Control and CSIR, Delhi.

The study – Genomic Characterisation and Epidemiology of an Emerging SARS-CoV-2 Variant in Delhi – has appeared in pre-print server and is yet to be peer-reviewed.

The scientists studied the main lineages of SARS CoV-2 in north India and found prevalence of the Delta variant in Chandigarh, Himachal Pradesh, Punjab, Leh, Jammu and Kashmir and Uttarakhand. The Delta variant was reported to be the massive surge in cases in these areas in April.

Genomic surveillance data from Delhi and surrounding states also shows an early phase of the upsurge driven by the entry of the more transmissible B.1.1.7 (Alpha variant – first detected in the UK) into the region in January.

This was followed by seeding of the B.1.617 variant of concern – which too is highly transmissible – with rapid expansion of B.1.617.2 sub-lineage outpacing all other lineages.

The B.1.617.2 variant has higher transmissibility than the Alpha variant in north India, even in Punjab, where B.1.1.7 had reached close to 100 per cent prevalence, reveals the latest study.

According to the scientists, the April outbreak in Delhi was preceded by outbreaks in the states of Kerala, Maharashtra and Punjab. The outbreak in Punjab has been related to the introduction of B.1.1.7 (Alpha variant).

The scientists have found a strong connection between Delhi and Punjab, with respect to, B.1.1.7 variant.

The B.1.1.7 (Alpha variant) outbreak in Punjab points out at a super-spreader event like mass public gatherings and rallies held in different parts of north India since January 2021, and highlights the important role of social factors in SARS-CoV-2 outbreaks.

The scientists found the same pattern in Punjab and Delhi with initial seeding of Alpha variant between February and March replaced by B.1.617.2 (Delta variant) in April 2021.

The study found that the surge of SARS-CoV2 infections in Delhi and nearby states was best explained by the introduction of a new highly transmissible VOC – B.1.617.2 (Delta variant) – with likely immune-evasion properties, insufficient neutralising immunity and social behavior that promoted transmission.

The variant has now spread to over 63 countries and is believed to be 50 per cent more transmissible than Alpha.