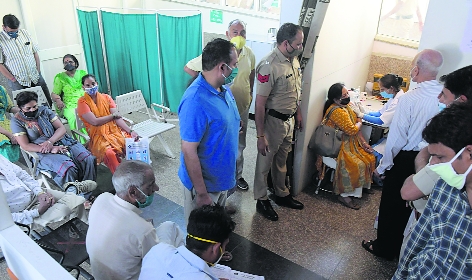 A woman being vaccinated at the Civil Hospital in Panchkula on Friday. TRIBUNE PHOTO: RAVI KUMAR

The district today reported 183 fresh coronavirus cases, the highest single-day surge since the inception of the pandemic, taking the overall tally to 13,371. While 181 cases had surfaced on September 15, 172 infections were reported on August 26 last year during the peak of the first wave.

Among measures being taken to prevent the spread, the vaccination drive is being prioritised to build herd community so that the transmission chain can be broken. Now, the vaccination will be done throughout the week, including Sundays, to cover the vulnerable population of above 45 years at the earliest.

Even though most cases are mild and in home isolation, a dental college in Barwala has also been made functional as a Covid care centre in view of a significant rise in the patient load. Its current capacity of 70 beds can be expanded to 200.

The district, which shares its boundary with the badly affected Chandigarh and Mohali, has been seeing a rapid rise in the coronavirus cases in the past few weeks.

Even though it is the least populous district of Haryana, it currently figures among the top five districts with the highest active cases in the state. The active caseload, which stood at 124 on March 1, now stands at 1,038. The recovery rate has also dipped to 91.08 per cent from 97.48 per cent on March 1.

The current wave — How it began

The district had started witnessing a downward trajectory in daily Covid-19 cases towards the second half of December, and on February 1, the daily count had come down to just seven cases, which was the lowest since July last year. On February 24, the Civil Surgeon’s office had issued a circular to step up preventive measures against the coronavirus amid a surge in other parts of the country.

The first week of March unfolded with an increase in daily infections and the cases kept rising steadily through the month. The month witnessed around 2,200 cases, a seven-fold increase from around 300 infections in February.

On March 26, the Deputy Commissioner had told health officials to ramp up testing to 2,500-3,000 per day. However, the district has been able to conduct around 1,400 tests each day in a week’s time (between March 27 and April 2) after the directions.

The Civil Surgeon, Panchkula, Dr Jasjeet Kaur, said they had increased sampling capacity focusing on areas where clustering of cases was likely to happen. “Other measures such as a strategic survey in badly affected areas, strengthening contact tracing and expanding vaccination coverage are also being taken to arrest the spread,” she said.