With 101 fresh cases, including five deaths, reported in the last 24 hours, the state count of Covid-19 cases has reached 5,668.

One death each was reported from Amritsar, Gurdaspur, Tarn Taran, SAS Nagar and Ludhiana. With these, the number of casualties due to Covid-19 has reached 150.

Besides, 13 persons are on oxygen support — six in Amritsar, five in Jalandhar and two in Sangrur. 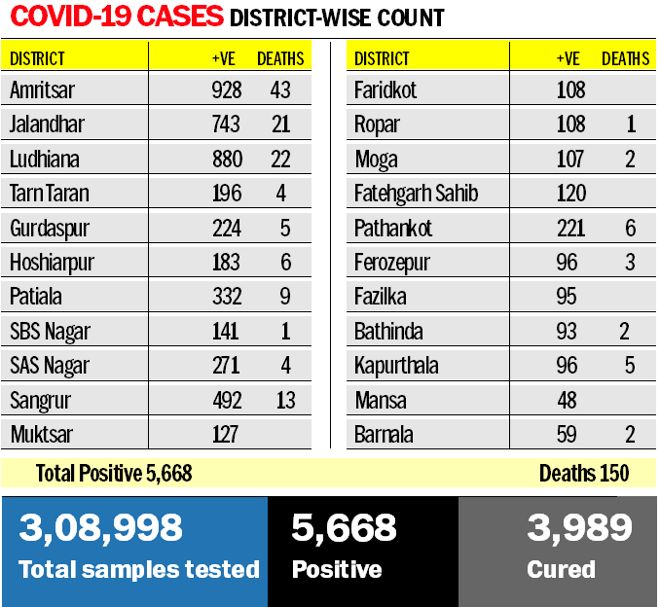 With the death of a septuagenarian due to Covid-19 in Amritsar, the casualty count in the district reached 44 today. The deceased has been identified as Om Parkash (73), a resident of Green Avenue.

The district health authorities in Amritsar have reported that six persons are on oxygen support, while one is on ventilator report.

In Ludhiana, a 71-year-old woman, who tested positive for Covid and was also suffering from diabetes and respiratory ailment, succumbed to the disease at the CMCH today. Besides, 41 more positive cases have been reported in Ludhiana district in the last 24 hours. An additional station house officer of Mullanpur Dakha is among the positive patients.

With nine more testing positive in Jalandhar district today, the tally has reached 743. The new cases include a doctor from a private hospital, who tested positive today.

As per the state media bulletin, 41 cases were reported from Ludhiana, 17 from Amritsar, 9 from Jalandhar, five each from SAS Nagar, Hoshiarpur and Moga, four from Fazilka, three each from Patiala, Gurdaspur and Faridkot, two each from Sangrur and Pathankot and one each from Tarn Taran and Bathinda.