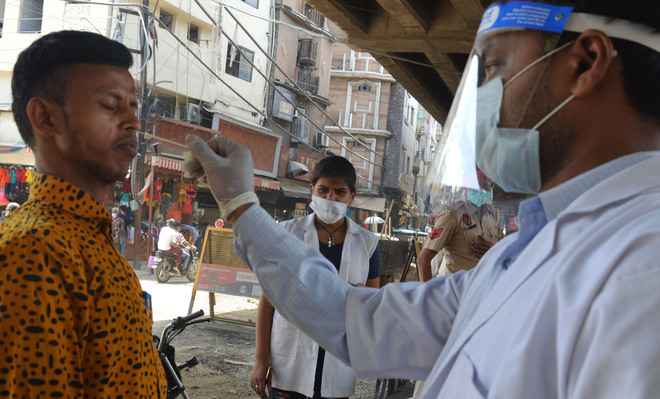 As many as 67 persons tested positive for Covid, while one woman lost her life to the virus in district today.

The deceased belongs to Maachiwara. She was 33 years’ old and admitted to CMC Hospital.

The recovery rate of Covid-19 patients has reached 96.3 per cent, while the case fatality rate is 2.39 per cent.

Deputy Commissioner Varinder Kumar Sharma said under the Mission Fateh of the Punjab Government, the number of Covid-19 patients getting cured in the district is increasing with each passing day. There are 1,133 active patients in the district at present and 83,186 patients have recovered so far in the district.

A total of 77 patients (67 new patients from Ludhiana district and 10 from other states/districts) have tested positive in the last 24 hours.

He said unfortunately one patient (from Ludhiana district) lost his life on Tuesday. Now, the total number of persons who lost their lives is 2,065 from Ludhiana and 1,022 from other districts.

Today 10,870 samples of suspected patients were sent for testing and their results are expected shortly.

Civil Surgeon Dr Kiran Gill said people are scared of coronavirus but they should also know that it is very easy to stay away from it. All they need to do is follow the Health Department’s guidelines.

A mucormycosis (black fungus) patient from Ludhiana lost his life on Tuesday. Now total deaths due to black fungus have reached 18 — eight deceased belonging to Ludhiana and 10 from other districts.