The petition has sought the removal of people squatting under the garb of farmers agitation and clear all the roads and public places. 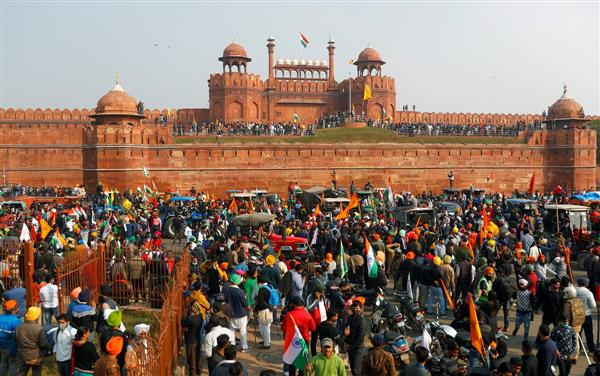 As many as 19 people have been arrested and 25 FIRs lodged in connection with the Republic Day violence in the national capital. Reuters photo.

As many as 19 people have been arrested and 25 FIRs lodged in connection with the Republic Day violence in the national capital during the farmers’ tractor rally in protest against the three new agri laws, the Centre informed the Delhi High Court on Wednesday.

Additional Solicitor General Chetan Sharma and central government standing counsel Ajay Digpaul further told the high court that as many as 50 people have been detained and an investigation was going on into the incident.

They also submitted that adequate security personnel have been deployed at the Red Fort for its safety and security.

Taking note of the government submissions, a bench of Chief Justice D N Patel and Justice Jasmeet Singh sought to know whether any similar matter has been already filed in or was pending before or disposed of by the Supreme Court.

It asked the central government to give it details of any similar matter in the apex court and listed the petition by a Delhi resident, Dhananjai Jain.

The petition has sought the removal of people squatting under the garb of farmers agitation and clear all the roads and public places.

It has also sought a direction to remove the Delhi Police Commissioner from his position with immediate effect and punish all the police officers who allegedly failed in discharging their duties relating to the Red Fort incident on Republic Day.

The tractor rally on January 26 that was to highlight the demands of farmer unions to repeal three new agri laws dissolved into anarchy on the streets of the national capital as thousands of protesters broke through barriers, fought with the police, overturned vehicles and hoisted a religious flag from the ramparts of the iconic Red Fort.

The petition has also sought a direction to the Centre to put adequate paramilitary forces to protect important monuments and to ensure the safety of life and property of citizens of Delhi and restore the feeling of confidence and security amongst them.

On January 12, the Supreme Court had stayed the implementation of the contentious new farm laws till further orders and constituted a four-member committee to make recommendations to resolve the impasse over them between the Centre and farmers’ unions protesting at Delhi borders.

Thousands of farmers, mainly from Punjab, Haryana and western Uttar Pradesh, are protesting at various border points of Delhi for over two months now against the three laws—the Farmers’ Produce Trade and Commerce (Promotion and Facilitation) Act, the Essential Commodities (Amendment) Act, and the Farmers (Empowerment and Protection) Agreement on Price Assurance and Farm Services Act. —PTI