From February 1-23, the count of daily cases had been recorded below 200 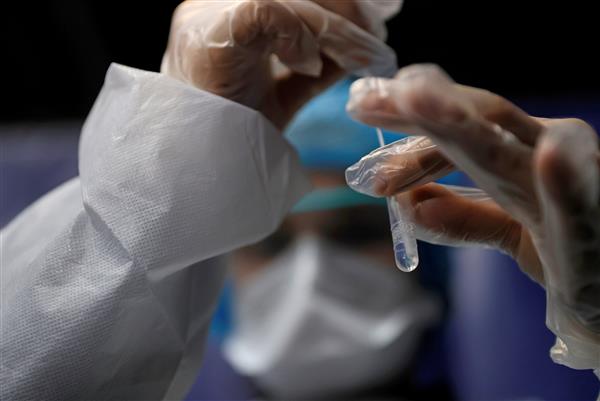 A medical worker holds a test tube after administering a nasal swab to a patient at a coronavirus disease. — Reuters

Delhi recorded 197 new COVID-19 cases on Sunday, while one more fatality pushed the death toll to 10,910, according to data shared by the city health department.

On the preceding three days, the count of daily cases have stood at 200-mark or beyond.

On Friday, 256 COVID-19 cases were registered, the highest number of single-day incidences in February, while on Thursday and Wednesday the count stood at 220 and 200, respectively.

On Sunday, Delhi recorded 197 fresh COVID-19 cases and a positivity rate of 0.34 per cent, authorities said, adding that the infection tally in the city has risen to 6,39,289.

One more death was recorded on Sunday, taking the toll to 10,910, according to the latest health bulletin issued by the city government.

From February 1-23, the count of daily cases had been recorded below 200.

On Thursday, no fatality was registered, the fourth time the single-day fatality count stood at zero this month. On February 9, 13 and 17 too, the death count was zero.

On February 9, no fatality from coronavirus infection was registered in the national capital for the first time this month, and after a gap of nearly nine months.

The 197 new cases on Sunday came out of the 57,772 tests conducted the previous day, according to the health bulletin.

The tally of active cases on Sunday rose to 1,335 from 1,307 the previous day, according to the bulletin.

The number of people under home isolation as on Sunday rose to 691 from 627 on Saturday, it said, adding over 6.27 lakh people have recovered.

Delhi had recorded 96 coronavirus cases on January 27,  that time the lowest in over nine months, and the first time the daily incidences count had stood below the 100-mark in that month. — PTI