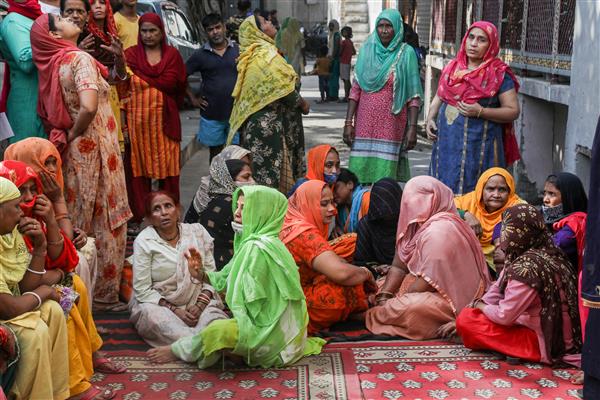 Family members and relatives mourn after a massive fire broke out on the top floor of three-storey building in Old Seemapuri area killing four people, in New Delhi, on Tuesday, October 26, 2021. PTI

His elder brother was scheduled to get married in November and his father’s retirement was due in March 2022.

But the family’s plans for the future have been reduced to cinders after a fire in their east Delhi home killed his entire family while they were sleeping, says Akshay Kumar.

The 22-year-old is the sole survivor from the fire that ravaged their Old Seemapuri home in the early hours of Tuesday, killing four people.

The family owned two floors in the building. Kumar slept on the second floor, while the rest, father Horilal (59), mother Reena (55), brother Ashu (24) and sister Rohini (18), were on the third.

A housekeeping worker at a Sahibabad (UP) firm since January, Kumar said he came home around 12 am. He went to the third floor to get food and later slept on the second floor.

Police said he survived since the fire did not spread out.

Recalling last night, he said, “Around 4 am, I heard my neighbours screaming my mother’s name. When I came out, they said the glass of the window of third floor, where my four family members were sleeping, was broken and smoke was coming out of it. I was on the second floor and went upstairs, but there was heavy smoke. I came downstairs and again went up with neighbours to check on them.

“The window glass was broken, and there were signs of struggle on the main gate as my brother tried to open it. Later, police and fire brigade were informed about the incident,” he said in a voice shaking grief.

“Ashu’s marriage was fixed around six months ago and scheduled for November, but the date was yet to be decided. He used to work as a housekeeping staff in North Block. Ashu used to sleep on the second floor, but for the past few days, he was sleeping on the third floor of the building where the fire broke out,” Kumar said.

Horilal was working as a peon in Shastri Bhawan, Delhi, and was due to retire in March 2022. His wife worked as a sweeper in MCD. His daughter was a class 12 student at a government school while his son was unemployed, he said.

Kumar’s employer, Pooran Singh, said he was shocked by the news.

Police said the fire might have broken out and spread across the third floor of the building. The victims might have died due to inhaling smoke, but the exact cause can only be ascertained after the post-mortem report arrives, they said.

Suraj Pal, who lives in the area, said neighbours informed the younger son when they noticed smoke coming out of the third floor.

“The neighbours kept banging on the main gate for five to 10 minutes till Kumar opened it. He went upstairs and said nobody was responding. Later, police were informed and they reached the spot along with the fire brigade,” Pal said.

Kumar said the family was from Mathura in Uttar Pradesh.

Sunil Kumar Dhigan, who lives on the first floor of the building, said Horilal was a very humble and soft-spoken person.

He used to talk to everyone politely, Dhigan added. PTI