4 killed, 2 injured as truck overturns on Innova in Gurugram : The Tribune India

Accident happened near Sidhrawli village on the Delhi-Jaipur Highway 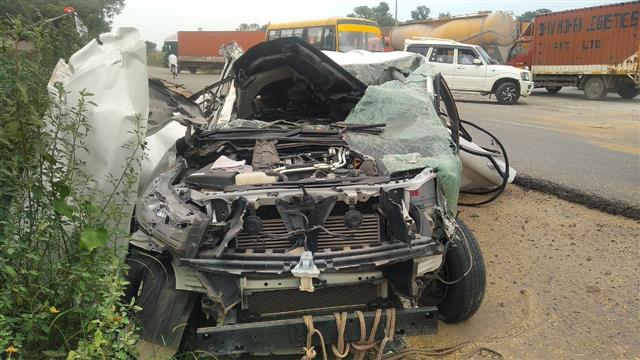 A speeding truck overturned on an Innova car near Sidhrawli village on the Delhi-Jaipur Highway. Tribune Photo: S Chandan

In a road accident, four people were killed and two others injured on the Delhi-Jaipur Highway in wee hours today after a speeding truck overturned on an Innova car near Sidhrawli village.

The incident happen when six persons, including the driver, were returning in Innova SUV from Udaipur. Bodies of the deceased have been kept in mortuary while injured were rushed to hospital to treatment, said police.

According to the police, the accident happened near Sidhrawli village at around 2am. A group of five youths, including 2 girls, had gone to Udaipur on a trip from Noida on Sunday. They were returning late night and when the SUV reached Sidhrawli, a speeding truck overturned on the vehicle. Four people, including a girl and the driver, died on spot and two others were injured.

Police said they all were working with a private company in Noida.

“We have informed the families of deceased and injured. FIR will be registered soon,” said inspector Ajay Malik, SHO, Bilaspur.