AAP leaders, including the party’s national convenor and Delhi Chief Minister Arvind Kejriwal, congratulated Pathak over his victory in the bypoll 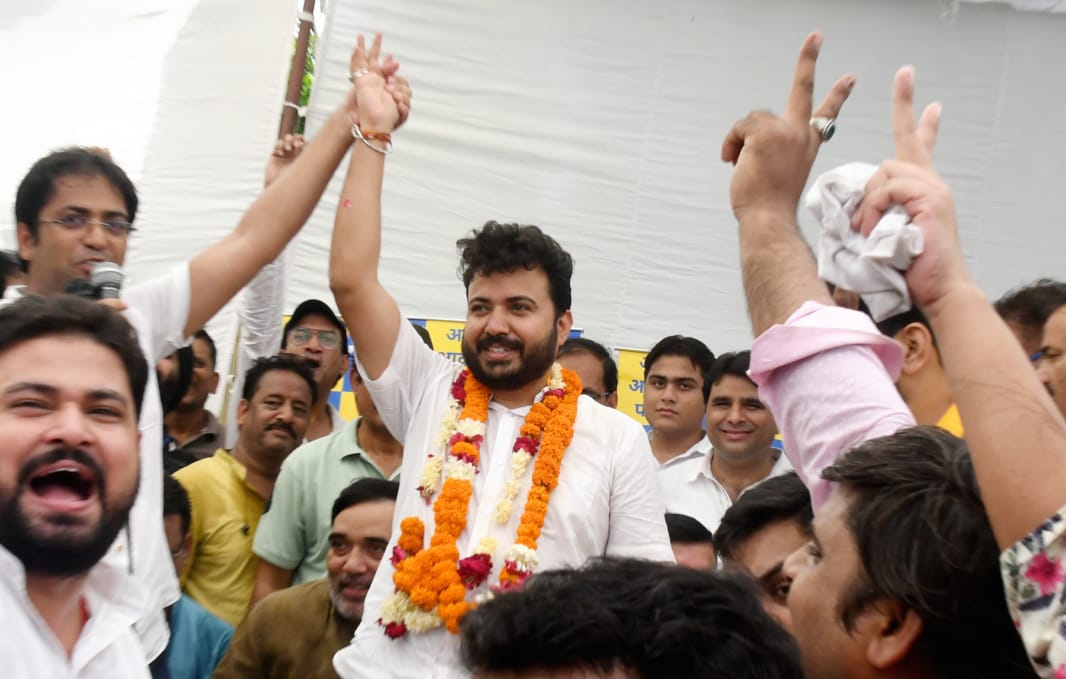 “All 16 rounds of counting have been completed. AAP candidate Durgesh Pathak has defeated his immediate rival Rajesh Bhatia (of BJP) by a margin of over 11,000 votes,” Delhi Chief Electoral Officer Ranbir Singh said.

According to official data, AAP’s Pathak polled 40,319 votes, while his nearest rival Bhatia managed to get 28,851 votes. The victory margin was 11,468 votes.

Congress’ contender Prem Lata could get only 2,014 votes in the bypoll.

The poll panel is yet to come out with the final voting figures.

The bypoll to the crucial assembly seat had taken place on June 23 with a low turnout at 43.75 per cent. Fourteen candidates threw their hats in the fray, which has largely been seen as a battle between a confident AAP and a spirited BJP.

Counting of votes had begun at 8 am amid tight security arrangements.

At the start of counting of votes, Pathak had a slender lead of 1,500 votes over Bhatia which reduced to around 1,000 votes in the end of fifth round of counting. After the sixth round, AAP’s Pathak galloped ahead with a margin of 3,000 votes which rose to over 10,000 by ninth round and eventually winning the crucial Rajinder Nagar by-election with a margin of over 11,000 votes.

AAP leaders, including the party’s national convenor and Delhi Chief Minister Arvind Kejriwal, congratulated Pathak over his victory in the bypoll.

“Heartfelt thanks to the people of Rajendra Nagar. I am grateful for this immense affection and love of the people of Delhi. This inspires us to work harder and serve.” Kejriwal tweeted in Hindi.

“People defeated their dirty politics and appreciated our good work. Thank you Rajendra Nagar, thank you Delhi,” he added.

Delhi Deputy Chief Minister Manish Sisodia also congratulated Pathak and tweeted in Hindi, “Many many congratulations to my dear brother @ipathak25 (Durgesh Pathak) on being elected MLA from Rajendra Nagar Vidhan Sabha. Congratulations to all the workers of AAP for the victory.” “In the heart of the people of Delhi, @ArvindKejriwal ji lives,” he added.

The by poll was necessitated in the wake of AAP leader Raghav Chadha leaving the seat after being elected to the Rajya Sabha recently. Chadha was the MLA from the Rajinder Nagar Assembly seat.

This was also the first electoral exercise in Delhi after the outbreak of the COVID-19 pandemic in 2020. Twenty-four Covid-positive voters turned out to exercise their franchise in the by poll, officials had said.

Also, 1,899 voters in this assembly seat are in the 18-19 age group, according to the data shared by the office of the Delhi CEO.

The Rajinder Nagar bypoll turnout was even lower than the figures recorded in the Rajouri Garden bypoll (46.5 per cent) and Bawana bypoll (44.8 per cent), both held in 2017. In 2015 polls, the two Delhi assembly seats had registered a turnout of 72 per cent and 61.83 per cent, respectively.