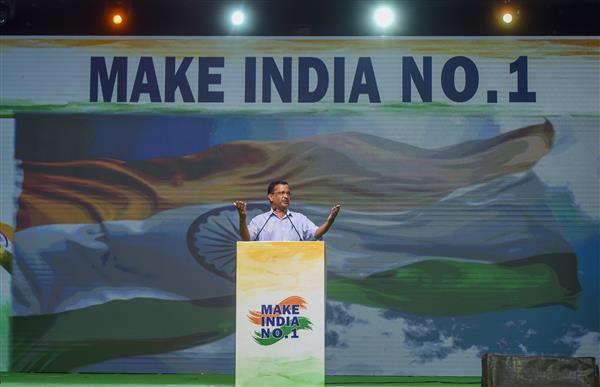 Delhi Chief Minister and AAP convener Arvind Kejriwal addresses during the launch of the mission 'Make India No. 1', at Talkatora Stadium in New Delhi, on Wednesday, August 17, 2022. PTI

With an eye on the General Elections-2024, AAP national convener and Delhi Chief Minister Arvind Kejriwal on Wednesday announced “Make India no. 1” mission political parties, urging all, including BJP and Congress, to take part in it.

However, in the immediate context, BJP-ruled state of Gujarat will go to Assembly polls towards the end of this year. AAP has pulled out all stops to make a dent into state during the election.

Launching the mission, he said it was apolitical. He will visit across the country to achieve this mission.

In an address, Kejriwal set out five goals in the mission relating to education, health, jobs, farmers and women, saying their achievements would help achieving it.

He said it was possible because the country is teeming with a diverse range of professionals, and a wealth of 130 crore population.

Facing criticisms for AAP’s alleged culture ofannouncing freebies as electoral promises, Kejriwal said for the mission to come to fruition, free education to all children, employment to youth andhealthcare to all citizens, among others, are needed.

He said the people of the country are still suffering in want of basic amenitiesafter 75 years of Independence.

“People should not leave achievement of these basic goals to them,” Kejriewal said without naming any political parties.