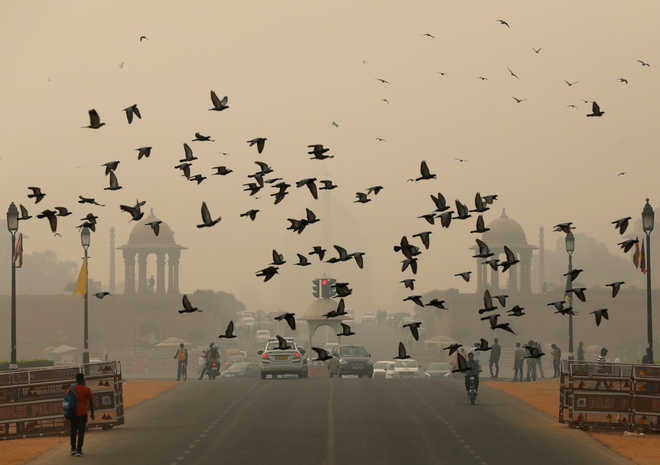 Birds fly as people commute near the Rashtrapati Bhavan on a smoggy day in New Delhi. — Reuters

Minimum temperatures dipped in most parts of north India on Sunday with Srinagar recording a low of minus 3 degrees Celsius, while a cold wave swept parts of Delhi which recorded its coldest November morning since 2003.

The national capital’s minimum temperature dropped to 6.9 degrees Celsius while the air quality remained “poor” and government agencies said it is likely to deteriorate further due to unfavourable meteorological conditions.

“The Safdarjung Observatory which provides representative data for the city, recorded a minimum of 6.9 degrees Celsius. It is Delhi’s lowest minimum temperature in the month since November 2003, when the city recorded a low of 6.1 degrees Celsius,” said Kuldeep Srivastava, the head of the India Meteorological Department’s (IMD) regional forecasting centre.

The mercury dropped to 6.1 degrees Celsius at the Palam weather station.

For the plains, the IMD declares a cold wave when the minimum temperature is 10 degrees Celsius or below and is 4.5 notches less than the normal for two consecutive days.

“However, for small areas such as Delhi, a cold wave can be declared if the criteria is fulfilled even for a day,” Srivastava said, adding icy cold winds blowing from snow-laden western Himalayas have led to a dip in the mercury.

The minimum temperature will rise by two to three degrees Celsius in the next four to five days under the influence of a fresh western disturbance.

Jammu and Kashmir’s summer capital Srinagar recorded the coldest night of the season as the minimum temperature dropped several degrees below the freezing point across Kashmir region, while the weather department predicted a spell of wet weather in the Valley from Monday.

Srinagar recorded a low of minus 3 degrees Celsius on Saturday night which is the lowest so far this season, a weather department official said, adding the minimum temperature settled below zero degree across the Kashmir valley.

The famous ski-resort of Gulmarg in north Kashmir’s Baramulla district was the coldest recorded place in the valley at minus 7.4 degrees Celsius, while the mercury settled at a low of minus 5.6 degrees Celsius in Pahalgam tourist resort in south Kashmir’s Anantnag district, he said.

The official said a spell of rain and snow, especially over the higher reaches, with light to moderate intensity is most likely to occur between November 23-25.

“Snowfall over the higher reaches of north-west J-K and Sonmarg-Zojila area is likely to commence from November 23 morning and is likely to affect both UTs till November 25,” he said.

Cold conditions continued to sweep a few districts of Himachal Pradesh with the meteorological department forecasting rain and snowfall in the state on Wednesday.

The Shimla Meteorological Centre had earlier forecast rain and snowfall from Sunday-Wednesday. However, its director Manmohan Singh said on Sunday that a ‘yellow weather’ warning had been issued for heavy rain at isolated places in the mid-hills and snowfall in high hills of the state for Wednesday.

The weather office issues colour-coded warnings to alert people ahead of severe or hazardous weather that has the potential to cause damage, widespread disruption or danger to life.

Yellow, the least dangerous of all the warnings, indicates the possibility of severe weather over the next few days.

Allahabad recorded a minimum temperature of 10.5 degrees Celsius, followed by Kanpur where the mercury settled at 10 degrees Celsius. The weatherman has forecast mist or shallow fog on Monday morning and dry weather across Uttar Pradesh on Tuesday and Wednesday.

Maximum and minimum temperatures hovered below normal limits across Haryana and Punjab, with common capital Chandigarh recording a high of 22.5 degrees Celsius, four notches below normal.

The mercury also dipped in parts of Rajasthan with Churu recording a minimum temperature of 5 degrees Celsius on Sunday, the lowest in the state.

According to the IMD, scattered to fairly widespread rain and snow are very likely over the Western Himalayan Region during November 23 and 26 while isolated parts of Himachal Pradesh and Jammu and Kashmir may witness heavy snowfall on November 25. — PTI