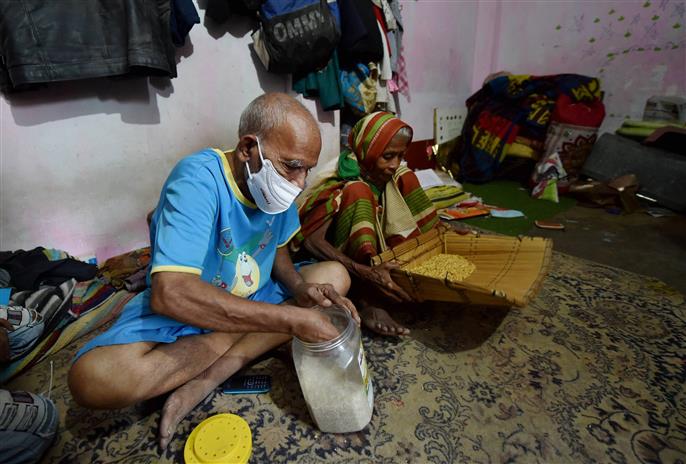 Kanta Prasad with his wife Badami Devi at their house in New Delhi. PTI file

Kanta Prasad and his wife—the elderly couple owning the ‘Baba ka Dhaba’ that made headlines after a video about their struggle making ends meet in the pandemic went viral—on Tuesday underwent cataract  surgery.

The medical procedure has been offered to the couple by Delhi’s Sharp Sight Eye Hospital free of charge.

“We spent so many years with hazy, unclear vision. But now we can see everything crystal clear. It’s like getting a new eye. Our economic condition is such that we could have never afforded cataract removal,” Kanta Prasad said.

Prasad and his wife’s plight came to light last month after a social media influencer captured the 80-year-old owner of the Malviya Nagar food stall tearing up while narrating the challenges his family had been facing since the lockdown, and posted it on social media requesting people to help the couple.

Soon after the video went viral, help poured in from across the city, and the country for the couple.

“We saw the video and more than his helpless state, we were moved by the spirit of the old man and his wife to fight hunger and earn livelihood for their family during these challenging times,” said Deepshikha Sharma, CEO, Sharp Sight Eye Hospitals.

“While many of us are confined to our homes fearing COVID-19, here’s a couple who have a bigger worry and that is to survive and have no choice but to open their eatery every single day,” Sharma said.

According to the statement from the hospital, their objective was to help the couple recover their vision so that they wouldn’t have to be dependent on others.

“Our team escorted the old couple to our hospital, and did a thorough eye check up and during investigations realised that their vision had deteriorated due to cataract. We decided to perform cataract surgery along with implantation of the latest type of intraocular lens as our way of giving them support,” said Samir Sud, director and senior ophthalmologist, Sharp Sight Eye Hospitals.

“As a result, the old couple can lead a new life independent of glasses and see the world around them brighter and clearer once both their eyes are operated,” he said.

Sud added that surgery had been performed on one eye for both of them and the second eye was scheduled to be operated on next week. PTI