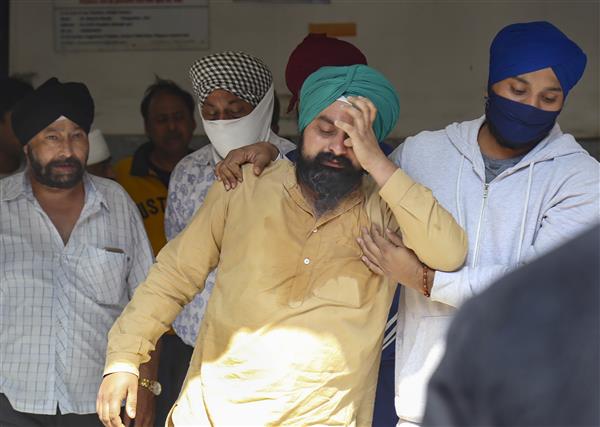 Paramjit Singh husband of a 25-year-old woman, who was allegedly stabbed to death during a robbery bid yesterday, is condoled by relatives as he wails outside Babu Jagjivan Ram Memorial Hospital in New Delhi on February 28, 2021. — PTI

A 25-year-old woman was stabbed to death while resisting a chain-snatching bid in northwest Delhi’s Adarsh Nagar area, police said on Sunday.

A senior police officer said the woman, Simran Kaur, was returning home from the market along with her two-year-old daughter and mother when the incident occurred around 9.30 pm on Saturday.

Police said they have arrested two men in connection with the incident.

The accused have been identified as Fardeen (19) and Aqibul (22), both residents of Jahangir Puri, they said, adding that Aqibul allegedly stabbed the woman during the snatching bid.

The incident occurred hardly 20 metres from her house and there is a police post around 100 metre from the spot.

The accused stabbed the victim and fled, police said, adding that she was taken to a hospital where she was declared brought dead.

A CCTV footage of the incident went viral on social media.

In the video, the two women can be seen walking when a man chases them and tries to snatch the victim’s chain from behind. Simran chases the man following which he falls on the road. Thereafter, he stands up, stabs her and flees from the spot.

Police said they received information that a woman had been stabbed by two men who were on a scooter.

The victim was taken to Fortis Hospital in Shalimar Bagh where she succumbed to injuries, police said.

A case under Section 302 (murder) of the Indian Penal Code was registered at Adarsh Nagar police station and investigation was taken up, police said.

“During investigation, it was revealed that the victim, along with her mother, was returning home from the weekly market. The accused men came on a scooter and one of them followed her and tried to snatch her chain. When she resisted and tried to nab him, he stabbed her and both fled the spot,” Deputy Commissioner of Police (Northwest) Usha Rangnani.

The weapon of offence and scooter used in crime have been recovered, the DCP said.

Simran’s aunt said she had gone to the market to buy medicines for her daughter.

“She was wearing a chain and holding her daughter. The accused was chasing them and tried to snatch the chain but Simran caught hold of it and did not lose her grip. When she resisted, the accused fell on the road. When she turned towards him, the accused stabbed her twice and fled the spot. We got to know that the accused was with his accomplice who took him on a scooter and fled from the spot,” her aunt said.

Amit Mehra, Simran’s neighbour, said he took her to hospital in his car.

“When the incident occurred, the guard followed the accused, but he escaped along with his accomplice who was waiting for him on a scooter. I took her to MD City hospital at Model Town in my car. They referred her to Fortis hospital where she was declared brought dead,” Mehra said. PTI