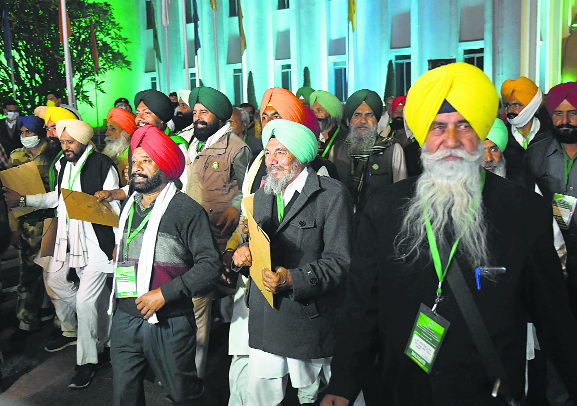 The representatives of 35 farmer unions after their meeting with Union ministers over the new farm laws at the Vigyan Bhawan in New Delhi on Thursday. Tribune photo: Manas Ranjan Bhui

The meeting between farmers’ representatives and the Centre on Thursday failed to break the impasse, but there was some movement forward. The BJP-led NDA government appeared to soften its stance, agreeing to make some amendments and conceding to certain points raised by the farmers’ leaders, who said they would decide whether to attend the next meeting on December 5 after consultations on Friday.

New Delhi: Punjab CM Capt Amarinder Singh demanded urgent resolution of farmers’ issues, citing strain on security and state’s economy, after he met Union Home Minister Amit Shah here on Thursday morning. “My appeal to farmers is to find a quick solution. It is impacting national security and Punjab’s economy,” he said. Ahead of the CM’s meeting, Congress leader Rahul Gandhi tweeted, “Anything less than the repeal of three black agricultural laws would mean betrayal of the interests of farmers.” TNS

Farm leaders on Thursday refused the lunch offered by the government during their meeting with the three Union ministers here and preferred to eat food ferried in a van from the Singhu border. They reportedly told the government to focus on resolving the issues instead of trying to play a good host by offering lunch. “How can we have government lunch when our fellow farmers are sitting on roads,” remarked one of them.

The police on Thursday shut routes on two NHs connecting Ghaziabad to Delhi as farmers remained adamant on their demands. A group of farmers blocked the Jaipur-Delhi highway. A protest was staged on the Rajasthan-Haryana border in Alwar district.

Ghaziabad: BKU chief Naresh Tikait on Thursday demanded a provision for jail for traders seeking to purchase farmers’ produce below the MSP. He was addressing farmers on Delhi-Ghaziabad border where they also had a few skirmishes with the police. Post meeting, Tomar said the talks had concluded in a “very positive atmosphere”, adding that there was “no ego involved” and the government had agreed to “discuss and consider with an open mind” all points of concern raised by the farmers, including strengthening of the mandi system and tax parity with the proposed private mandis. “We will hold discussions on how to make the APMC stronger... farmers’ concerns over the SDM courts will too be addressed... We are also ready to discuss the air quality ordinance and electricity Act,” Tomar said. “They want amendments, but we want the Acts repealed. Besides, they have only given us assurance (on amendments),” pointed out Shiv Kumar ‘Kakkaji’. Kavitha Kuruganti of the Mahila Kisan Adhikar Manch said: “It is not clear as to what the government wants as it is willing to make only amendments.” The BKU (Ekta-Ugrahan) chief, Joginder Singh, said they wanted the “black laws” to be repealed forthwith and nothing less was acceptable. “We are not going to vacate the protest site, whatever tactics the government employs,” he warned.