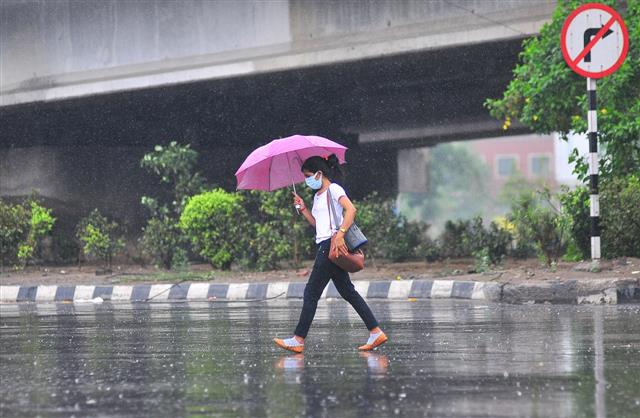 Delhi-NCR woke up to a clear sky on Friday morning with a possibility of a rainy weekend, according to India Meteorological Department (IMD).

The IMD said Saturday and Sunday might have a cloudy sky with light to moderate rain.

The maximum temperature was recorded at 32 degrees Celsius and the minimum at 18 degrees celsius, according to the IMD.

The maximum temperature recorded on Thursday was 32.4 degrees Celsius, minimum at 17.7 degrees celsius and relative humidity was pegged at 63 per cent at 8.30 a.m.

Over the next six days, the maximum temperature is likely to hover around 31 degrees Celsius and the minimum will drop to 15 degrees celsius.

The level of PM2.5 and PM 10 pollutants stand at 82 (moderate) and 202 (moderate), respectively, according to the System of Air Quality and Weather Forecasting And Research (SAFAR), the air quality monitoring and forecasting system under the Ministry of Earth Sciences.

"Delhi's AQI is in the moderate category. As per SAFAR methodology effective fire counts are 1,234 and its share is 15 per cent in Delhi's PM2.5 as transport level winds are favourable for intrusion. However, local winds are moderate that enhances dispersion of pollutants keeping AQI in moderate category. Share of fire emissions is expected to increase in next two days.

"In presence of local dry weather and north-westerly wind local dust emission leads to increase of PM10. Additional dust input from desert areas via transport is very likely. The overall AQI is likely to degrade to poor in next two days," SAFAR stated.

As per the Central Pollution Control Committee (CPCB), the Air Quality Index (AQI) of Anand Vihar area is 'moderate' at 174.